Recently, two movies get bad automatic metadata : they get metadata for another movie

This happens in spite of the year being in the file’s and its containing folder’s names.

For the movie Emily try changing the year to 2023.

I see where a few country specific release dates are set for 2023 instead of 2022.

Still looking at the other.

Also what language do you have set for metadata in Infuse?

I renamed both with 2023 years and they both worked. 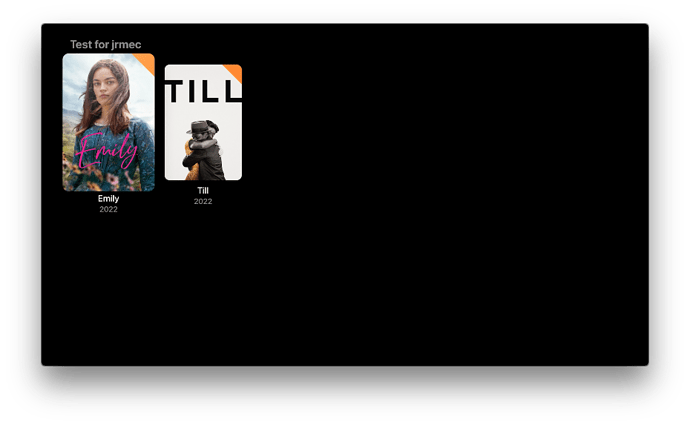 Why? I have no clue.

Why does is show the right year?

I’m guessing that with movies that are released close to the change of a year things get more grey that black and white.

This query is from TMDb. There isn’t much that infuse can do about it. It tries to find the closest match and ranks them according to popularity in additional to name and year. So by picking 2023 it won’t coincide with the 2022 releases.

You’re right. Unless the query interprets the year as the 1st of January of that year, which would explain the results.

It tries to find the closest match and ranks them according to popularity in additional to name and year.

And the shorter the movie title, the more likely the listing will be hijacked by another, more popular movie, in spite of correct title and release year.

TMDB doesn’t seem to add any more weight to initial release year than any other regional or reissue year … even if a DVD comes out somewhere in the world 20 years later.

I have noticed the same thing recently. Most of the time when I have a mismatch it’s on titles that contain only one word. I had the same issue with “Emily (2022)” and the other issue I had last week was with “Moon (2009)”. It was recognized as “The Twilight Saga: New Moon (2009)”. It’s kind of annoying to have a file named properly with the exact movie title and year and the matching algorithm selects a partial match instead.

With Emily, the top result was 7 in popularity while the one you want was 6900…so it’s trying to get what most people would be searching for. For moon, this should be correct (just tried it).

Yup, had that too. At the time, the only thing I could get to work was to use the Estonian alternative title “Kuu”.

Another frustrating one was the 2016 movie “Lion” that kept getting highjacked by the 1994 movie Lion King — even using the year filter, which made absolutely no sense.

Why? Because somewhere in the world it was aired on TV in 2016 (or maybe released on DVD). I just deleted that entry. No one has seemed to miss it.

I’ve had at least two dozen titles in my 3500 movies that won’t scrape correctly even properly named.

With Emily, the top result was 7 in popularity while the one you want was 6900

Emily is the second one offered for “Emily y:2002” on the web interface (which is more accurate than the scraper infuse uses) — but it still prioritizes “Emily the Criminal” from the same year and I fracking hate that.

If we wanted “Emily the Criminal” than we’d include the words “the Criminal”. TMDB Nonsense.

For a file for which you only have partial name matches, I can understand using the popularity to pick one. But in the case of a properly named file for which you have an EXACT match for the title and the year, I don’t understand why you wouldn’t want to use that match and instead pick another movie because it’s more popular.

Yes I understand the frustration but take it up with TMDb. It’s their algorithm that returns the match

They aren’t the most flexible bunch.

I had a quick look at their API documentation and support forum and the ability to perform an exact search has been requested multiple times over the years. There is talk to add this capability to their website and their API. Some of the work appears to be tagged as “Done” but I’m not sure about the API. Maybe someday they will do something about it.

For reference: Search movie should be more accurate - Talk — The Movie Database (TMDB)

I had a quick look at their API documentation and support forum and the ability to perform an exact search has been requested multiple times over the years.

It’s obviously /capable/ of doing an exact search. I just can’t for the life of me figure out why they don’t automatically always prioritize exact matches when they are found.

Maybe they prioritize exact matches when it is more than 1 word searches?

when it is more than 1 word searches?

Maybe. But the longer the name, the more accurate the search. If you were ever going to need to prioritize exact matches, it’s with the short titles.

So if I understand well, TMDb id unlikely to correct this in the very future.

One temporary solution, for advanced users, would be to force the TMDB id. of the video, in the same way one can force the metadata themselves with a properly formatted XML file.

One possibility is to use the same XML file (name of the video file but with .xml as extension) and to indicate the TMDB id in it.
That would cause the Infuse metadata parser to use this TMDB id. instead of querying it from the file name.

If you think this is a not too stupid idea, I will put it in the correct place for suggestions.

One possibility is to use the same XML file (name of the video file but with .xml as extension) and to indicate the TMDB id in it

My experience has show that Infuse builds a completely separate databases when users include .nfo files colocated with their video files (presumably it does the same with .xml but I’ve never used that flavor). This was only noticeable to me after Infuse recently-ish added support for custom cast & crew.

After the change, if I searched for an actor, Infuse returned two identical results for each one — the actor as listed in my .nfo files (sourced from TMDB), and the (same) actor as indexed on addition during Infuse’s background querying of TMDB.

What I found was that the TMDB (normal Infuse database) was generated on Import as normal; but the .nfo-based database was only indexed “on-demand” — after a file is navigated to and shown onscreen.

This results in one of the actor/crew results displayed in search (and the actor/crew photos listed on movie & episode details / info pages for titles where you’ve included local .nfo) to have incomplete information. An actor who has been in a lot of movies in your collection might show 20 titles on one listing, and only 12 on the other, for example.

Even if the incorrect movie isn’t show in the library, it will likely be returned in searches for titles or especially cast and crew. If the wrongly identified title is embarrassing, that can be problematic — you wouldn’t even know it was there until you (or someone else) stumbled over it.

Firecore’s current solution to this issue is the “Edit Metadata” button, which allows the user to manually query TMDB and select the correct movie — which TMDB ever after will associate with that title; until you change the filename of delete the local metadata database.

Edit: Updated link to skip to the part of thread where I better understood the issue.