When searching metadata for the following film/miniseries, I’m unable to find this title. It was working previously, but I’ve just noticed that it is recently broken - shows image from file, but does show that Leelee Sobieski is in the cast (nothing else). File name is “Joan of Arc (1999).m4v” 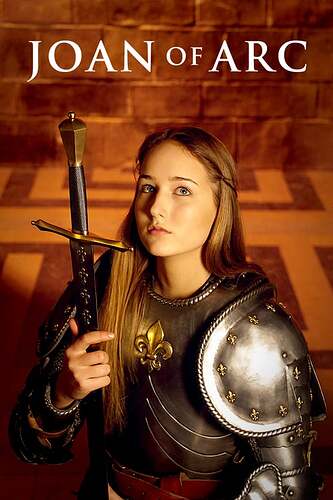 Joan of Arc is born in 1412 in the village of Domrémy in the war zone of Northern France. During her youth she often witnesses the horrors of war, but her spirit is kept high by the legend of the Maiden of Lorraine. This says that a young maiden one...

There was a recent change at themoviedb.com where they would only support a title once if it was a mini-series and also a movie. They did the same thing with Stephen Kings IT. It looks as though even though it’s called a movie it’s also listed as a 2 episode mini-series so you’d have to have the season and episode numbers for it to work now.

As a work around if you have only the single file you can try using “Joan of Arc.s01e01.m4v” and that will at least get you the right pictures and cast. But the “Joan of Arc.1999.m4v” will get you a different movie “The Messenger: The Story of Joan of Arc” with a different cast from themoviedb.com.

Thanks for this explanation NC. Changed names on this side and it worked like a champ. Greatly appreciate you help. - Matt

Glad it’s working now for you!