Another question on the change to TMDB.

With the change in metadata and Infuse internal reference numbers for series and episodes will this affect the watched status?

While my Plex will continue to serve my metadata, maybe there is a compromise to be made for those that get data directly…

While building on the new API’s for TMDB, why not build a global switch and fallback to theTVDB while access is still available? That would mean that any missing data in TMDB requested falls back on theTVDB while its available, and the moment the licensing and access for theTVDB lapses, toggle the global switch and get out of theTVDB loop for good…

This fallback will take a split second to fall back on theTVDB data, but the compromise it enables for missing data, languages and other objects might just be worth it…

I know this is extra work, but surely less than updating an entire API version or having users complain about missing data…

Also, someone with full access to theTVDB API should be scraping the hell out of the data and populating it on TMDB…

Thanks for the answer. When will you make the change completely to themoviedb ? Is it something in the upcoming infuse 7 ?

When will you make the change completely to themoviedb ?

James is keeping the first post of this thread updated so keep an eye out there.

Update Feb 8, 2021: We’ve been weighing the options for the past few weeks, and as of right now it looks like we are planning to move to TMDb within the next few months.

I was originally up for switching but I’m thinking now that it might be a bad idea after all for people with thousands of episodes named and sorted based on TVDb.
Furthermore, TMDB does not support (nor have any plans of supporting) DVD and other alternate ordering of episodes which at least TVDB has even tho no way to access via infuse atm.
https://www.themoviedb.org/talk/54a1e4bec3a3682f2300db4a

Unless you can work on the suggestion linked below, you might end up screwing a lot of folks, some who don’t have access to this blog so they might not even know what’s coming.

Better the devil you know…

The info for shows on TMDb and TheTVDB are very similar, so we don’t expect any major issues here. Trakt is also switching providers, and they put created a tool to compare things side-by-side. While there are some minor differences, most of the content matches up well.

With regard to alternate ordering, the thread you referenced is pretty old, and TMDb does actually support alternate orders for series. This is something we plan to integrate into Infuse in a future update. 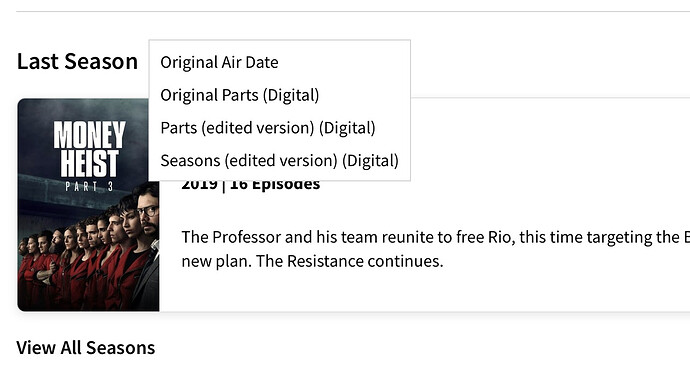 Keeping both providers is something we considered, but any app that wants to continue using TheTVDB after they shut down their old APIs in the coming months will need to work to implement their new v4 API, which is quite a bit different. The conclusion we came to is the time that would be devoted to implementing this new API would be better spent on some of the great features found in our Suggestions area, including the one you linked.

If they support alternate ordering and you can make that accessible by infuse then that would be a big step. That was my biggest issue I guess. That and combined episodes. I also despise the 680x1000 poster low-limit on TVDB and look forward to the higher quality TMDB artwork.

The conclusion we came to is the time that would be devoted to implementing this new API would be better spent on some of the great features found in our Suggestions area , including the one you linked.

I’ll hold you to this.
Let’s get those 5-6 year old suggestions with massive support worked on and out the way. I’m not gonna lie, it kills me inside everytime I see infuse updated and on the release notes it says NEW… then I see JellyFin/Emby intergration/support instead of features people actually suggested like say, Custom Movie Collections so we don’t have to fight every time with TMDB over their definition of “Collection” , et cetera, et cetera

A post was split to a new topic: New user questions

It will be good for the episodes in two files

In China, there are a large number of Emby users writing content for movies and TV series on TMDB. This makes me very envious because their media library is Chinese content.

If Infuse uses TMDB, this will be a very, very good thing for us Chinese users!

While working on this, please consider the option to “manually add the TMdb code”:

Hi. With regards to this switch I have encountered a couple of problems. They cropped up when using filebot to rename files.
Filebot gives you the option to use metadata fetcher - Either TVDB or TMDB.
I noticed that TVDB puts years on some shows where TMDB doesn’t.
As an example - The Flash. TVDB puts (2014) in the filename whilst TMDB doesn’t.
This helps seeing as there are two Flash TV series - One from the 90’s.

Same with New Amsterdam - One series is about a hospital. Another is about a homicide detective. Yet TMDB doesn’t differentiate. (At least when renaming files)

FBI (2018) was “automatically” rename to “The F.B.I - xx” which is a completely different series.

Will this be an issue? Do i now need to have NFO files?
I am now getting worried about all my TV shows metadata going pear shaped…

If you go to TMDb and search one of those with year query they show up right:
“New amsterdam y:2008”
This is how the movies with years work. Doing shows should work the same. Don’t search “new amsterdam (2018)”

I was wondering when the switch to TMDB will happen?
I know I asked this a while back, but it doesn’t seems to have happened yet? So I was wondering if there had been some delay?
If the change have happened, then I have a problem. I have all seasons of Pokemon. On TVDB it only counts 19 seasons, but on TMDB they count 23 seasons. I know that TMDB is the one in the right here, but infuse still seems to be using TVDB scraper, as it can only find metadata for the 19 seasons.

I was wondering when the switch to TMDB will happen?

You can check in the upcoming features thread for the most up to date info on new features planned releases.

Please make sure this works even when the folder is set to “local metadata”!!!
This is a VERY important issue!

Honestly the best option would be to have the choice between several sources when it comes to metadata. Why can’t we just choose by ourselves which source of metadata is the more appropriate ?

I prefer AniDB or AnimeDB when it comes to scrap my anime folders, the same with TVDB for TV shows and MovieDB for films.