Suggestions for improving sort by filename

Forum auto-banned me from replying to original thread because @James never answered and users are not allowed to reply to themselves.

To get these to appear under E, you can try renaming the episodes to ‘Expanse 2015 S01E01’

Tried, and it didn’t work.

Two weeks have elapsed since I told you this, and still you’ve provided no response.

Meanwhile, I note Infuse’s “Sort by Filename” setting also breaks TMDB Collections sorting, perhaps providing insight into why “Sort by Filename” for TV items doesn’t actually sort by filename as you recently assured me it would. I hope this insight helps you fix the problem(s).

I suspect Infuse treats TMDB’s Collection titles as defacto ‘filenames’ for the collected grouping when “Sort by Filename” is set.

TMDB’s “The Vampire Chronicles” collection, when sorted by Title, is correctly alphabetized under “V” for “Vampire” — because “Sort by Title” correctly ignores the leading article “The ” when present in such titles. 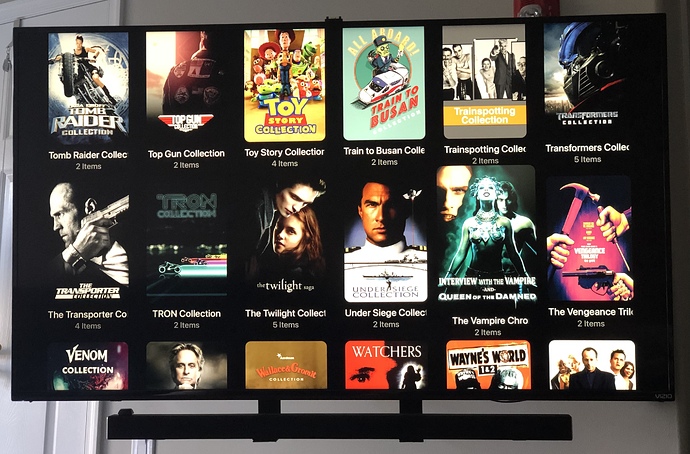 (*) Infuse does NOT correctly ignore the other English language leading articles “A ” and “An ” — an inexplicable discrepancy that needs to be fixed immediately — nor any common foreign language equivalents such as “Das ”, “Die ”, “El ”, “Ja ”, “La ”, “Les ”, or “Los ” when sorting by title — anywhere in the app.

All TMDB Collections whose titles begin with “The ” are now incorrectly alphabetized under “T” (for “The”) regardless the titles or filenames of the films contained within. This is obviously undesirable behavior. 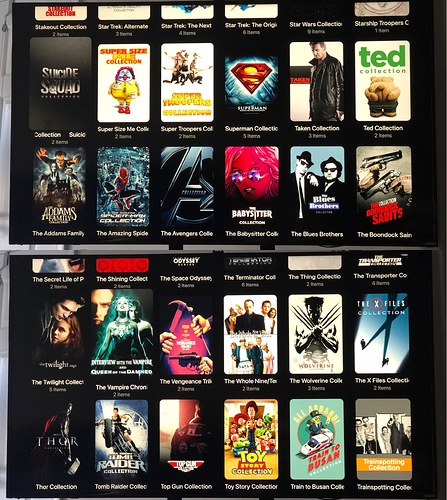 It is clear Infuse is not looking beyond the TMDB collection’s title because the titles of the films in the “The Vampire Chronicles Collection” are “Interview with the Vampire” and “Queen of the Damned”. Neither begins with “Vampire” and neither would otherwise be alphabetized under “V” — nor incorrectly alphabetized under “T” since neither films’ titles begin with “The ”, either.

I suspect because Infuse is simply (and lazily) treating the TMDB Series Title (“The Expanse”) as a defacto filename — just as it does for TMDB Collection titles.

@James, do not despair, because I also offer you a solution.

In both cases where you decided to treat TMDB TITLES as defacto filenames because actually analyzing users’ actual filenames was too unwieldy or difficult; do this: Alphabetize them as you would Titles.

For TMDB Collections, this would result in what users likely want, anyway. Users can’t edit TMDB collections so we already have no control on how they are organized. Keep them organized by title no matter the setting in Infuse.

For TV Series, which users OUGHT to be able to rename as they see fit to control how they are sorted (just as they presently can with movies), preferably do this: treat the parent folder name (the name of the folder containing the season subfolders — or if the latter are not used, the name of the folder containing all the TV Series’ episodes’ video files — as the defacto filename for the entire “collection” of video and metadata files for each given series.

Otherwise, if you can’t figure out how to program Infuse to accept anything but TMDB’s title as the defacto sort name for everything that makes up a TV series, then also alphabetize that TMDB title as Infuse alphabetized titles — no matter the user selecting “sort by title” or “sort by filename”.

If changing the thread title and moving to suggestions (without a status tag) is the only response you feel I deserve … (1) that’s unfortunate … and (2) that’s really unfortunate. 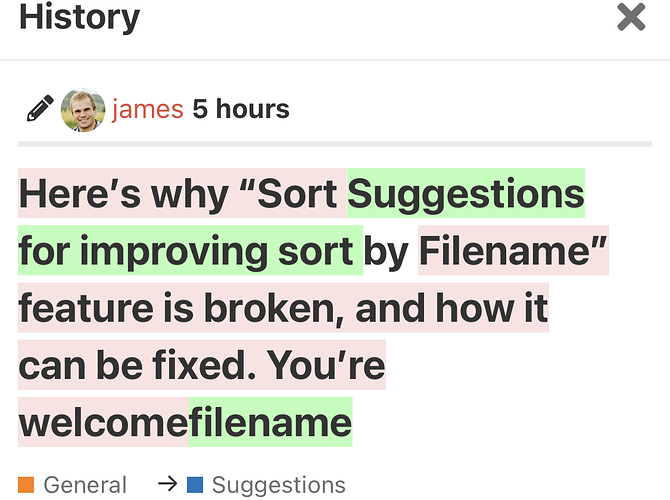 I understand you would prefer to see changes here, so that is why I moved it to suggestions. From what I can see, Infuse is working as designed, which isn’t necessarily wrong.

TV show sorting in Infuse is complicated, as it includes flattening of items in both library and files view. Due to this, there isn’t really a single filename to use for sorting - but instead a set of series, seasons, and episodes. Movies of course are different, so that is why you see differences there.

Regarding the sort of ‘A’ - IIRC, we originally disregarded these, but got a lot of negative complaints so it was reverted to being honored in the sort.

From what I can see, Infuse is working as designed, which isn’t necessarily wrong.

I agree it’s working by design. I wrote and shared this update because it seems that recent design choices made (perhaps when flattening TV series) had implications you weren’t aware of, considering you suggested I do something that had no effect on fixing the undesired changes to library sorting I’d encountered, which you were trying to help me resolve.

I understand you would prefer to see changes here, so that is why I moved it to suggestions.

Okay.
But it’s also the place issues you aren’t inspired by are packed off to and left to die, soooo…

This is incorrect.
TV show sorting in Infuse is actually quite simple now — you are sorting TV shows based on their TMDB-defined series title — same as you sort TMDB Collections.

What is correct is that you only disregard “The ” when sorting by title. But you use the TMDB-defined title to sort both Collections and TV series; regardless if a user tells Infuse to “Sort by Title” or “Sort by Filename”.

Regarding the sort of ‘A’ - IIRC, we originally disregarded these, but got a lot of negative complaints so it was reverted to being honored in the sort.

Respectfully, those people were wrong.

You are welcome to honor their personal preference (preferably by giving them an option for non-standard title sorting in settings) but bowing to their opinion was weak.

In no video store or library in the English speaking world would the DVD for “A Clockwork Orange” be sorted in the As unless the employee who did that was illiterate. It lives in the Cs. “A Fish Called Wanda” lives in the Fs. Anything else is nonsense.

Where do these people look for their favorite albums from “A Flock of Seagulls” or “A Tribe Called Quest” at the record store? They must be sad never to find them

Can you imagine trying to sort a whole library full of books this way? People trying to find the novel “A Clockwork Orange” in the As? Ha! It’s blindingly obvious the only place you’ll find that novel in any respectable library is in the … Bs … (for “Burgess, Anthony” - books are alphabetized by author’s last name, first name, don’t you know … but then by title … ignoring leading articles

In no video store or library in the English speaking world would the DVD for “A Clockwork Orange” be sorted in the As unless the employee who did that was illiterate. It lives in the Cs. “A Fish Called Wanda” lives in the Fs. Anything else is nonsense.

I remember these discussions, and we looked at numerous online library’s, collections, streaming services, and the consensus was to include A’s.

I remember these discussions

I’m therefor presuming one’s willingness to have accepted that “The Matrix” is an M movie, “The Usual Suspects” is a U movie, and “The Wizard of Oz” is a W movie, but that “A Boy and His Dog”, “An Officer and a Gentleman”, and “A Quiet Place” are all A movies (where clearly only titles such as “An American Werewolf in London” actually belong

), might have been inversely proportional to the relative size of their personal libraries?

There’s no difference between the two, apart from the reason to not alphabetize by leading "The "s becomes blindingly apparent earlier, when collections are smaller; given the roughly 11x¹ as many extant films whose titles begin with "The " as compared to those beginning with either "A " or "An ".

¹ based (unscientifically) on my count of their relative representation among the nearly 4000 unique movie and television series titles in my current collection: 83 leading "A " or "An " titles vs. 908 leading "The " titles².

² Counting only English language titles in each instance.

At this point it has probably been this way for five years+. There is no reason to change as that would mess up many people’s libraries and naming conventions. There are also people who prefer it the way it is and you would just upset them if it changed.

There are also people who prefer it the way it is and you would just upset them if it changed.

Fair enough. If “Sort by Filename” actually worked across the board (it works for movies but not for collections or TV series) the issue would be moot.

An option in settings to choose how one wanted titles sorted would be nice, regardless.