Slow library scanning issues? Anyone else?

Running a wired non local server scan seems to take forever and seems in limbo here. Yes its a server with 200k movies, over 1 mil episodes, and other but it seems to hang up and slow down even letting it run a day+. Is there anyway we could speed up/optimize the scanning of libraries? im not the only one i believe having this issue. plex runs alot faster and shows what files are actively being scanned as its doing it, maybe we could have that implemented in infuse? better indication something is actually happening? it seems in a loading loop on fetching contents. and yes i turned off the apple tv going into rest mode and activating screensaver

Yes its a server with 200k movies, over 1 mil episodes

Is there anyway we could speed up/optimize the scanning of libraries?

How on earth do you even view anything on that library in Infuse? 200,000 films, maybe at least 35,000 television series? Can you even scroll through that list is less than a day? A month? A year?

(My local library is just 100th the size, and I’m already reaching a point where I could binge watch an entire television season in less time than I’ll waste browsing the library for something to watch … and keep in mind … I only ripped or acquired content I thought I’d actually want to watch in the first place, and it’s taken years.)

better indication something is actually happening?

Just saw this part of your post (the other bit clearly threw me).
Infuse, when importing new titles, gives you a running count of the movies, tv shows, and “other” titles it has indexed on the bottom left of the Library settings screen … at least on AppleTV. I don’t have a Mac so can’t comment on it’s implementation there.

This is how it looks on an iPhone: 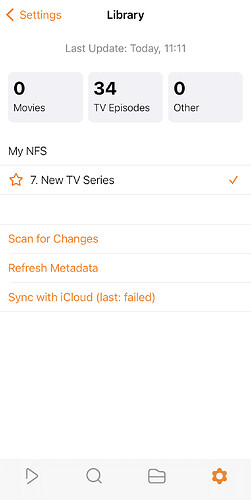 Alot of people have big media libraries, someday people might have billions. Anyways i was wondering if we could have a detailed scan option showing what files are being scanned and what info was retrieved in real time

infuse just gives a weird checking server msg while appearing to freeze or hang up, while plex literally shows the files being scanned

I’m guessing that you’re filling the available memory during the scan and it’s clearing it on the ATV.

Personally, I don’t archive TV shows that we don’t want to watch so I don’t even know how to figure out how much space or time it takes to index that many shows.

Heck, even if EVERY tv show episode you had was a 20 minute episode with no hour shows it would take almost 40 YEARS of non stop watching to run through that.

Throw in the 200K movies at even an hour each and you add another 22 years.

I don’t have that much time left.

okay i get it some have more disposable time then others, but still a detailed scan option would be great if they added and not leave people wondering if infuse froze or is hanging

Or don’t use use plex with large libraries and plex. Use emby/jelly where they have plugins so you don’t need to scan every file every sync. Find a diff provider who can give you a emby box instead of plex.

Plex/emby/jellyfin official client read the server DB directly, so it doesn’t need to update more than a few second.
Infuse doesn’t seems to read plex DB directly, and there’s a process in Infuse that will read Movie/TV metadata 1 by 1, so Infuse really isn’t made for people with more than a few thousand items.

My utterly ridiculous television and movies collection has grown to roughly 15,000 items. There is an initial delay when first setting up a library (on the matter of hours, depending on how slow my internet connection is, but taking place in the background) while Infuse queries TMDB for initial identification of my files and downloading complete metadata for all of them, but I haven’t felt like it’s taking excessively long or bogged down in use with a library my size (or as compared to when my library was much smaller).

Granted, 15,000 items (all stored locally) is only “a few thousand” when compared to remote networks purportedly containing many hundreds of thousands of files … but odds are Infuse has the vast majority of personal users covered, in this respect.

Infuse does appear to build it’s own complete database regardless if local metadata is used (support for local metadata override was added later on in the product’s life) … so it doesn’t look like you can avoid this possible duplication of functions UNLESS you simply use Infuse as a video player. You can do this by unchecking all favorites added to your library (unchecking favorites means that they are no longer indexed and local metadata is discarded) and instead accessing your files through the folders version of the interface, or internet links to remote files.

I had it hang (spinner) on my Apple TV on even small folders. Nothing opened without dealing with it. And my large folders were impossible to open.

Ultimately re-installed the application after fully deleting it. That resolved the issue. It will do the full scan of all titles the first time you setup the app. But stopped the re-scanning that was occurring once that was done.