Refresh time from tmdb to Infuse

Does it take 24 hours for a change to appear in Infuse? For example I removed Jon Stewart from alot of episodes of the Larry Sanders Show because he falsely appeared in to many. He stills show up in all of the episodes despite I changed this more than a week ago.

For some changes they may require a review prior to them being approved and disseminated. If you go to one of the episodes that you made the change on and do an edit metadata then re-select the correct show it should update with all new changes if they were approved.

You can also go on the TMDB website and review that particular episode to see if your changes have be put in place.

Many changes are in place within hours.

Jon Stewart was listed as an recurring character in all seasons. I removed him from season 1-4 because hes not in those. I didnt change a perticular episode. I have added guest actors to other episodes and I can see them in infuse. But Jon Stewart is still in all episodes. I have tried re-select metadata. I’m not sure how to check if my edits are review but when i look at his total episodes in tmdb they have atleast reduced. 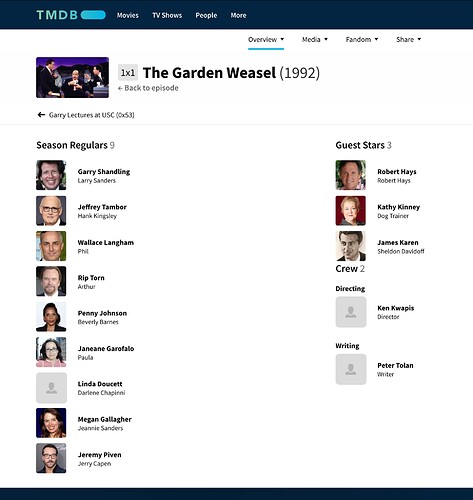 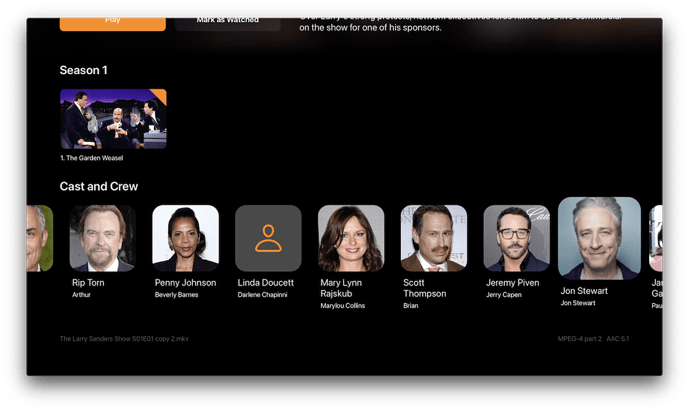 Before you post in their support forum though I’d suggest reading through their “Bible” on regular cast members here and make sure you’ve checked all the boxes.

For cast I don’t believe that infuse is always showing the correct actors for tv shows on an episode level. I noticed issues with some of mine and it wasn’t TMDb. It had something to do with the call and getting season regulars plus guests. Not sure status for that at the moment.

Does using the Edit option and reselecting the correct series title have any impact on this?

Are you able to list the specific episodes you are seeing issues with so we can look into this?

I did the S01E01 above and I didn’t have this show to start with so I got a first blush load. I did do a reselect and it still showed as the above screen caps.

EDIT TO ADD: Never mind! @ahanden says all is good today so my reply is bogus now. LOL

No it doesnt, but the Jon Stewart problem seems to have been fixed now. But i have the same problem with Mary Lynn Rajskub now. Shes listed on infuse in every episode of season 1 (and 2,3,4) wrongly. And Linda Doucett is listed twice.

the Jon Stewart problem seems to have been fixed now

Must have been a delay somewhere in corrections since it was repeatable yesterday. Thanks for the heads up!

Another similar problem is for The Terror (2018). Season 1 and 2 has completely different cast and it looks like its arranged properly in tmdb. But when i open an episode from season 1 in infuse i get the cast from season 2 too.