Thanks for the reply. I’ve been busy and haven’t used Infuse much in the last 4 days. Before I originally posted this I uninstalled and reinstalled the app.

I just updated to 6.4 about an hour ago and my cache is being rebuilt. The positive is that the white icons are gone. There’s a number of negatives that have popped up, though. TV posters have disappeared. It’s just a bunch of posters of folder icons.

Just curious, has Infuse completed it’s iCloud sync after the update? Mine took a much longer than normal time for iCloud sync the first time after the 6.4 update.

I’d watch the messages in the settings > Library to see when Infuse gets to the “Last update…” message and stays on it for a few minutes.

Then check the artwork that was missing. It may take a second or few to load when you scroll through it the first time.

Just passing on what I found which may vary from user to user.

I turned iCloud Sync off a few updates ago. If you click on the icon you can see the show’s season artwork and episode artwork. 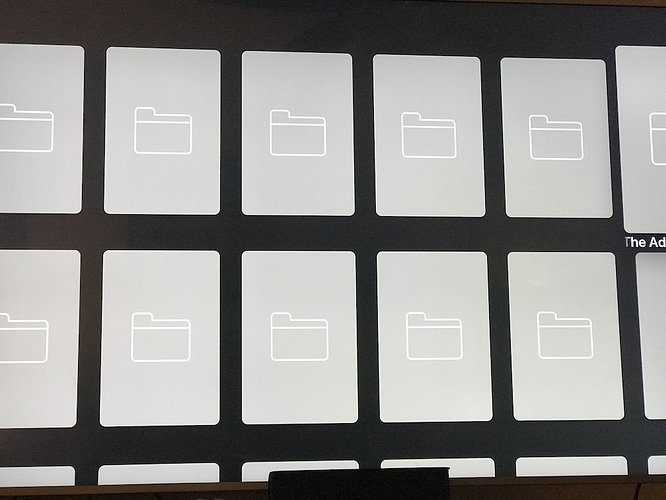 When I clicked on the TV folder, all the poster icons were initially there. Then I started to scroll down to the show I was going to watch and they turned into what’s pictured.

I also have to take back what I said about the Movie poster art being fixed. Instead of white they are now black or grey. Just solid colors, no icons.

My movie folders are from local metadata and the TV is obviously through online metadata.

Edit: After rebooting everything, again, the posters are white again.

When I clicked on the TV folder, all the poster icons were initially there. Then I started to scroll down to the show I was going to watch and they turned into what’s pictured.

Sorry for the trouble. This is something we’re looking into.

Thanks, James. I submitted a ticket. The code is SNXZH. I know I don’t explain things very well, but I’ll gladly answer whatever questions I can to give you all more information.

I’m having the same problem. Most of my TV show folders containing the various seasons show a while image, but when navigating inside the folders, the seasons themselves do appear. These folders used to show the TV shows’ main images, using online metadata and worked perfectly.

Same issue with one of my movie folders with a “folder.jpg” inside it that used to work perfectly as well.

As a developer I understand that bugs creep in…but this is a fairly basic feature that seems to be broken for many of us.

Hi,
I am having an issue with 2 movies in my collection of 4000 movies. When manually edit these 2 movies and chose movie from the IMDB database, Infuse is displaying a blank cover art on TV. Titles are correctly spelt (see below). What is wrong here ? Any suggestion ?

Thanks for helping me 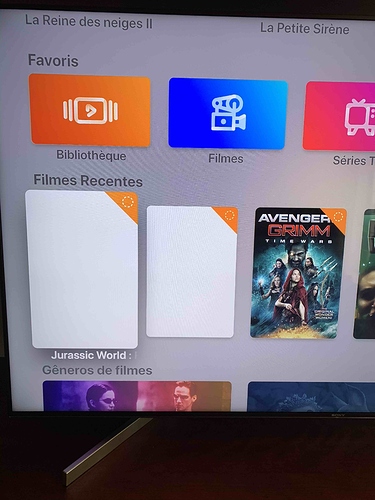 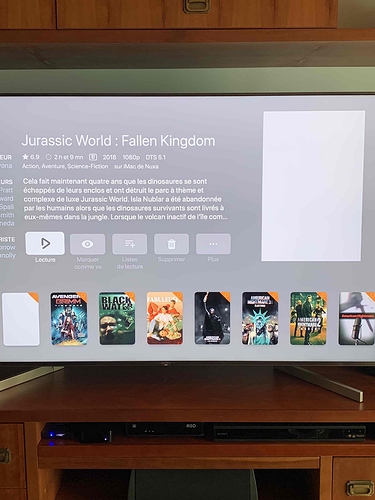 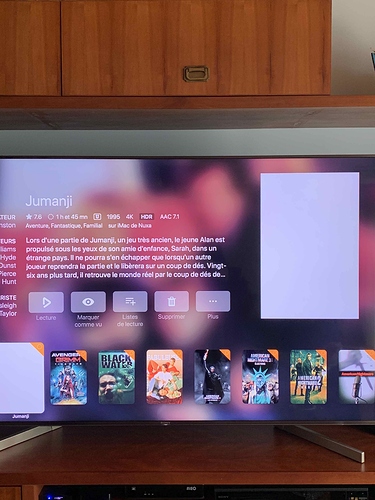 Today’s 6.4.1 update has a handful of artwork related fixes and improvements, but we’re still looking into a few particular issues.

Updating to 6.4.1 may solve issues related to white artwork for some, but rest assured we are still working to resolve the remaining issues.

Thanks for the update! I installed the new update and had to do a clean install due to the app crashing. A few updates ago TV stopped using my poster.jpg’s and started using random art from TMDB, And, as you’re well aware, the previous update caused TV posters to disappear altogether. With 6.4.1, my TV folder is now back to using my custom jpg’s.

If you are on Wi-Fi it could be a problem with Apple TV. Try restarting it to force it to reconnect to Wi-Fi

Reboot didn’t help. Thanks though.

It’s seems my movie posters are back instead of the white cover.

I’m actually affected by this, too, though the title of this discussion threw me off; I’m not experiencing white posters, but rather black and grey (on iOS), with a peppering of random scene screenshots of the media as a poster.

Is there really no other way than to clear metadata? I have too many titles like this to do it individually, and I’d prefer not losing the manually-corrected title matches.

Is there really no other way than to clear metadata?

This is TOTALLY a guess but what if you first turned off iCloud sync then cleared the metadata and then after it rebuilt everything turn back on iCloud sync? I wonder if that would then pick up your corrections.

This is TOTALLY a guess but what if you first turned off iCloud sync then cleared the metadata and then after it rebuilt everything turn back on iCloud sync? I wonder if that would then pick up your corrections.

I can try this, but if it fails to work, every correction will be followed by a curse of your name. Like a real mean curse. Just saying. And it won’t just be a handful of curses. It’s going to be a lot of curses. I’ll probably have to get creative after about the fifth curse, though, but I’m probably going to be too mad to be creative, so I’ll be cursing about that, too. It just won’t be good, is what I’m saying. It won’t be good.

Never mind, I may be nearing my max cursed limit and I still have about two servings of ice cream in the freezer so maybe hold off since this thread is marked as “Pending” so the wizards behind the curtain may have a better idea and I really like ice cream.

A post was split to a new topic: I Scream, You Scream, We All Scream For

6.4.1 seemed to fix most of the issues, but 6.4.2 brought them back. I’m plagued by black posters now, instead of the original white.

Same here a lot of black poster (for movies). The only fix (at least for me) is : clear metadata, clear iCloud data and restart from scratch.
I’m very very disappointed…the last releases are a complete mess.
Everytime 1 fix and 1 new bug and I have to rebuild my (huge) library…it’s unacceptable!

Did clearing everything work this time? It takes a lot longer to rebuild the cache than they say and I really don’t want to do that again. I’m spending too much of my free time messing with this stuff when all I really want to do is watch something.