Hi! I just moved to infuse from plex and signed up for the Pro version. Everything is great except for one issue with the playback:

I have the app on my mac and the video files are on my Synology NAS (Protocol NFS).

Now in 95% of the cases whenever I play or resume a video it takes like 15 seconds which is very annoying. When I play the file from the server directly with VLC media player that always only takes 1-2 seconds. Strange enough, in 5% of the cases it works instantly without any delay…

Any idea what is causing this delay and how to fix it?

Can you do a speed test through the share settings? Also is your Mac hardwired or wireless? 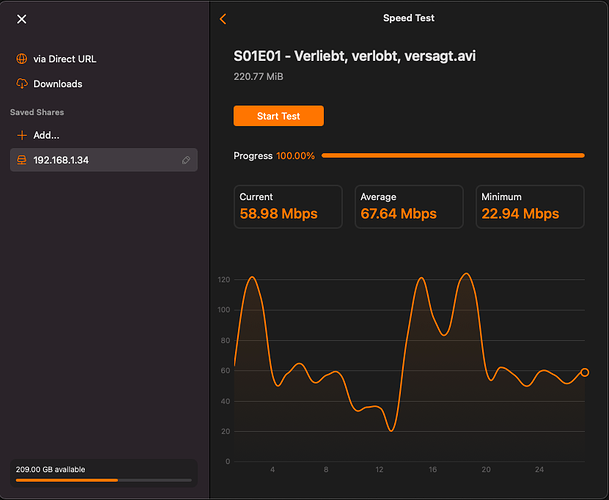 Here is the speed test. My mac is on WIFI (the NAS is on LAN). But I really don’t think it is a speed issue. The problem is the same for a 240MB tv show as for a 40GB movie (playback is always fine, just play/resume leads to a significant delay). And also if I play it on my Mac with VLC there is no delay when playing/resume (or maybe max 1-2 seconds).

Well those speeds are on the lower end so not surprised to see a bit of a delay but it should matter based on the bitrate. You could try adjusting the cache setting to legacy instead of auto.

How are you connecting the share to the Mac to play with VLC?

Is your NAS perhaps in sleep mode?

You could try adjusting the cache setting to legacy instead of auto.

I just tried thanks. Unfortunately the problem persists…

How are you connecting the share to the Mac to play with VLC?

Just trough the finder. I guess that’s with SMB protocol but don’t know how to check…

Is your NAS perhaps in sleep mode?

I just added one episode of the tv show to a local folder and added it to the library, when trying to play it I have exactly the same delay with play/resume. So I guess the issue is the infuse app itself which overloads my macbook air m1 for some reason until it plays… doesn’t make any sense though…

You could try adding your NAS as an SMB share and see if that may be better.

Also, just as a test you could connect your macbook to the LAN with an ethernet cable (if you have the adapter) and see if that may help eliminate the wifi.

I figured it out… so this is the first time I ran into a RAM issue with my 8GB… closed a few programs and now play/resume works instantly. Thanks for all the answers!