Not all metadata is showing from .xml

The Colour Of Magic (2008.).xml (920 Bytes)
What am I doing wrong here? I opened the “Inception” xml file that is gtiven as an example in BBEdit on Mac and edited it accordingly.

I don’t see any people, so to speak. But I do see the title, the description, genres, etc. What am I doing wrong with all the - tags?

Just a quick notice, it looks like you may have a hard return after the

Your text of the description should start right after the “>”

That may be throwing things off.

As a test, I’d say take the demo file and change ONLY the < title > < /title > along with the file name to the movie you’re working on and then see if you see the actors listed in the demo as cast for the movie your working on with that file.

Unfortunately that is not it.

I copied the “Inception.xml” and used it as metadata. Yep, works. I see everything in the file.
I change the title to The Colour Of Magic and I see no people. Hmmm… Interesting.
Change it back to Inception and I see Leo diCaprio… Change Leo’s name, re-load. Still Leonardo diCaprio.
Could it still be retrieving from TMDB?
I change the title to Top Gun and re-load it.
Tada!! We have Tom Cruise in the cast.

I think we have a bug here. Apparently when the title is found in TMDB it will show whoever TMDB says there is, or it shows no one.
The Colour Of Magic (2008).xml (973 Bytes) 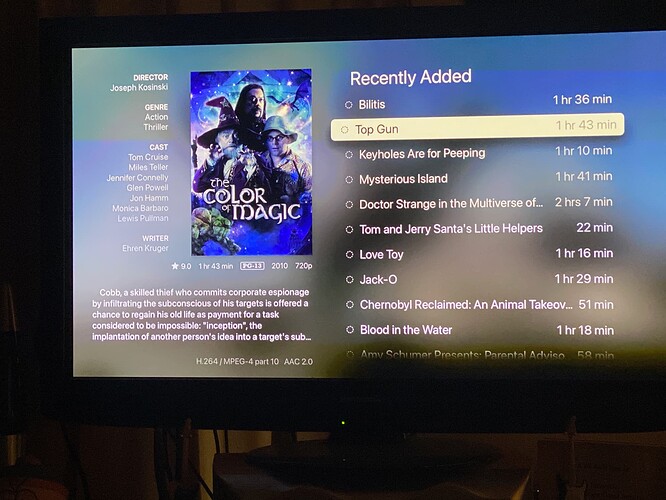 I just noticed that this is showing as a TV show and not a movie on TMDB. I don’t think you can do xml for TV shows currently. I just saw where you had media type as movie and that won’t work as far as I know.

As I have said in other threads ,I don’t care what is in TMDB. I care about what is in Trakt.

If I cannot use the xml to override what TMDB says, what is the use of the xml in the first place?

This is a single movie lasting 104 minutes. Granted it is possibly the two episodes combined, but still Trakt shows it as a movie as well as a TV show.

This is not supported now, but will likely be added in an upcoming version.

after the update to 7.1 the actors of all movies are gone. I only use the local nfo metadata. With infuse 7.0 the actors where displayed. example data: [image]