I’ve heard others say that they want to keep their M1 Macs “clean” of Rosetta 2, and, while that’s obviously your choice and I can understand the sentiment, all I’ll say is that I think you’re missing out.

Having used things like “Virtual PC” and even the original Rosetta, I’ve suffered through the barely usable (or unusable) experience of those options. Rosetta 2 is completely different. I think it would be almost impossible for people to tell whether or not they are using an app under Rosetta 2 or not.

If you decide, philosophically, that you don’t want to use it, that’s fine, but performance/experience-wise, there’s no reason not to install Rosetta 2.

Surprisingly stable performance so far, will return with more feedback after deeper testing!
Will a universal binary / dedicated M1 build be released later? This is my only app running on Rosetta currently.

Will a universal binary / dedicated M1 build be released later?

Lots of balls still in the air.

At the moment, everything I work with works fine with native M1. Docker, slack, Firefox, visual studio code, tower git, Xcode, nodes, Redis, natsio, sketch, movist etc… So I have everything I need without Rosetta.

So life is not bad without Rosetta at all for me. Most of the developer community reacted very well…

If you decide, philosophically, that you don’t want to use it, that’s fine, but performance/experience-wise, there’s no reason not to install Rosetta 2.

Interesting. I didn’t realize it wasn’t just baked into the OS by default.

I’m also waiting for M1 Beta version to come before to test it on my Mac mini M1. Thanks

All is working good on my Macbook M1 with Apple Silicon ! But the ressources aren’t optimized.
The app is launched with Rosetta 2 because it’s Intel64 based…
Have you in your roadmap something to make this app Universal ? I think M1 users could get a better battery life with an optimized app

You can also make you iPad App available for MacOS… It would be great !
Love Infuse

You can also make you iPad App available for MacOS… It would be great !

Probably not going to happen the way Apples going. 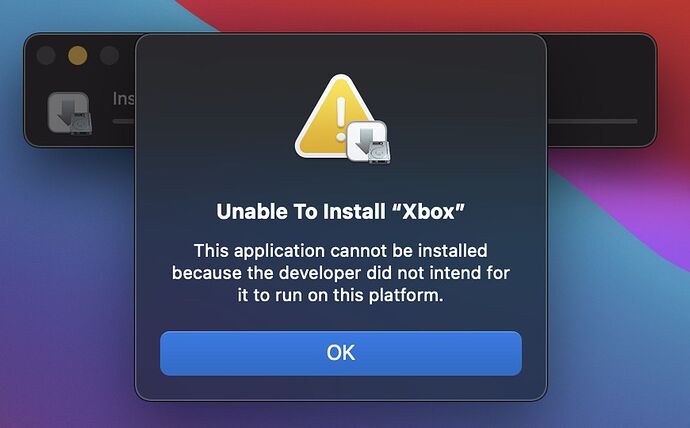 Apple this week implemented a server side blocking mechanism to prevent M1 Mac owners from sideloading iOS apps that have not been made available on...

Native Apple Silicon support is planned, and will likely be available in time for the App Store release of 7.0.

I have a M1 Mac Mini also. Is there any advatage to using the Mac Mini over the ATV4K ?

I had planned on using the M1 Mac MIni as an HTPC but after learning the HDMI output was locked to 48KHz (like the ATV4K) … It seemed to me like the ATV4K makes a better HTPC than the M1 Mac Mini. (Because apart from it’s HTPC abilities it has the built in interface and access to all the streaming services as well.)

BTW, … The ATV4K infuse 6 pro combination is like my favorite thing in the universe currently. I suppose a “new” ATV4K could be better somehow but for the moment this combination is the best thing my little HT has going on.

Edit - I guess I post too much chatter… I will DL and help test.

Wow, that installed much much faster than I could have imagined and It’s lovely!

Still no M1 support? So bad.

Why do you say “so bad”? M1 is supported, I am running it right now

Supported yes but using Rosetta 2. The app is actually based on Intel 64, so it works but it’s not optimized. For exemple VLC have a version Apple Silicon fully compatible M1, others (and Infuse will do it I hope) will develop Universal Apps for both platforms

To be honest, the M1 chips are so powerful and so energy optimized, that it most likely doesn’t matter that much. It sure can help with battery life but still I don’t expect like 50% increase. And as M1 chips have hw decoders anyways, I don’t think it even matters performance wise

so to say that it is “so bad”, is just ignorant…

This is in progress…

so bad…makes you want to go and just write your own app, right?

No, I’m a payer user so I have the right to say my point of view about slow updates.

You paid your money for the Apple TV Version or the iOS version, you can’t complain about an unreleased version that you are getting to test for free. M1 support is likely coming, however I can imagine the dev teams main focus is a generic version that works on most of the Mac’s out there. That includes the newer M1 (via rosetta2) and the much larger portion of older Intel Mac’s. It doesn’t make sense to prioritise the M1 version for a much smaller subset of users, than to get a generic version out there that covers the whole Mac user base. Sure the M1 specific version will follow, but its’ a little naive of you to expect them to prioritise a smaller user base.