Movies appear in Other when setting up new device

iCloud Sync doesn’t seem to be working on my new 2022 ATV 4K. All other devices (iPhone, iPad, MacBook & older ATV 4K) are correctly synced, but new device has all the content in Others. 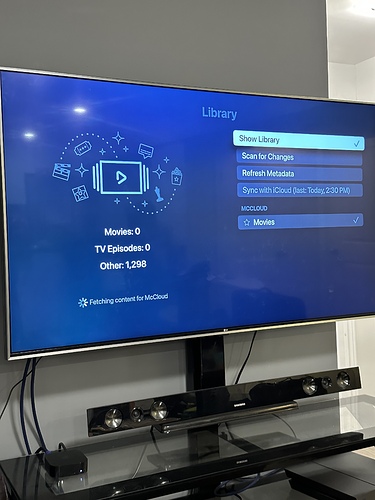 It shows that it’s still fetching content from iCloud. It will distribute the “other” into movies and TV shows as it progresses.

My hard drive is called McCloud. Screenshot was deceiving. It doesn’t move anything after completing. 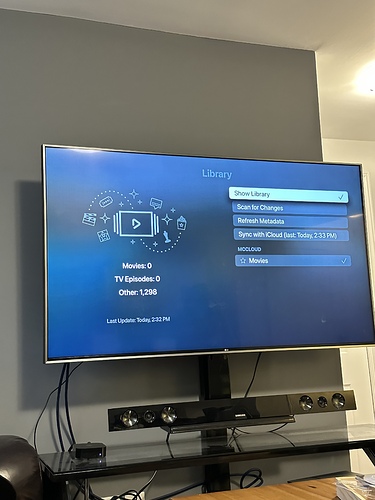 What do you see when you go to the Library then Others?

Also, you have to be using the primary user account on the ATV if you have more than one user set up for the ATV.

Also make sure you have the “Metadata Fetching” turned on in the General settings for Infuse.

Default user is used, Metadata fetching is on. When I go to “Other”, all movies are there

Could it be possible that something changed on backend of new 2022 ATV 4K that broke Infuse iCloud and/or Library sync?

Just cleared Metadata on my older pre-2020 ATV 4K, and it resynced correctly.

I guess maybe try deleting the app and trying again. Would think that everything tvOS would be the same. Maybe the Internet was disconnected when it was trying??

When you install the app on the new ATV are you manually adding shares and settings or are you letting Infuse load it all through iCloud?

Letting it load via iCloud

Can you try adding a sub folder as a favorite and see what happens?

Added sub-folder. Synced correctly to Movies on iPhone, synced to Other on ATV

When I go to “Other”, all movies are there

Do they have all the metadata and artwork?

Can you play them from there?

Artwork is there, and they successfully play from Other

Do you have any folders tagged to use local metadata? Maybe by accident?

Overview For some videos (like home movies) you may not want Infuse trying to fetch metadata and artwork for your videos. In this case, you can direct Infuse to use embedded metadata for a single v...

Tried uninstalling Infuse on other ATV & my iPhone, now they’re both reacting the same way as new ATV.

Can you try checking this on the Apple TV, or a device which is showing the issue?

I had the same problem last week. Seems like the last update fixed the problem. I love the “Syncing with iCloud” screen. Before that update I had to log in in gdrive and select the folders. Thanks James.