It seems to me that Infuse don’t respect monitor profile during output.
To get right Gamma and brightness infuse should read metadata in the HDR stream ( Dolby Vision or HDR+ use metadata extensively ) and covert 10bit stream to monitor gamma and brightness.
Or pass stream to correctly initialized system output library unchanged.

Test pattern also blown ou on my M1 Pro 16" MBP (the whites or the blues depending on brightness setting!!).
Seems fine on my Apple TV 4K and a LG OLED.

That might explain why, on the Mac, the Dolby Vision version often seems less vivid than the HDR version of the same video.

im not sure it explains the dolby vision problem as DV looks rly dull for me,not rly different from an sdr release,which shouldnt be the case,doly should be brighter and more vivid ,and have better hihglights in general

the HDR enhancement on mini-led MBP seems still has some wired clipping on 7.3.1 while I ran the test video. As you can see the box in red and blue area after C623 totally disappear as well as the pink one after C677 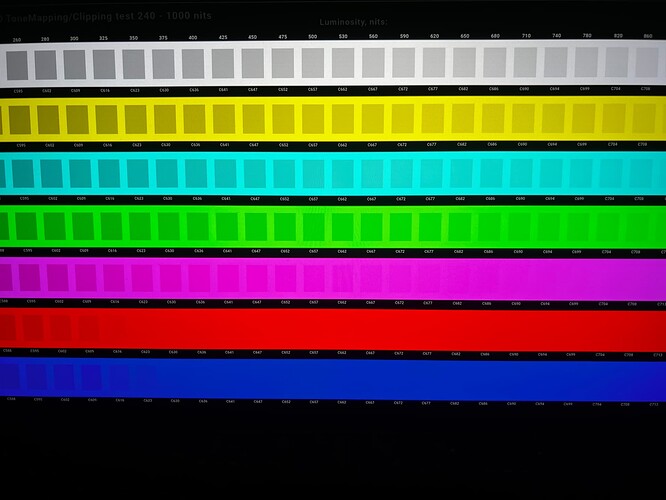 These calibration videos can be affected by display brightness, so you may try adjusting up/down.

Note: It’s also tricky to capture every color accurately in a pic. 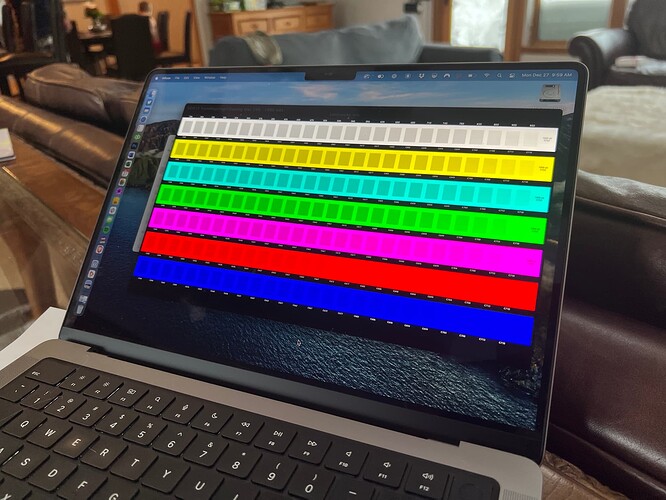 I’m still seeing the issue on 7.3.1. Pink, red and blue color bars are getting clipped early. The top bars all look good.

Opening the same file in Quicktime or even YouTube displays it properly.

It’s a lot better, but still not perfect like Quicktime. Why should it depend on display brightness? Shouldn’t it all just be relative to the max? In Quicktime it seems to be fine at all brightness values, same with the Infuse iOS app.

But while I watch some film, if the scene has lot of red and black colour then the red and black gradient area would become over exposure and the noise appears. This issue won’t appear on QuickPlay 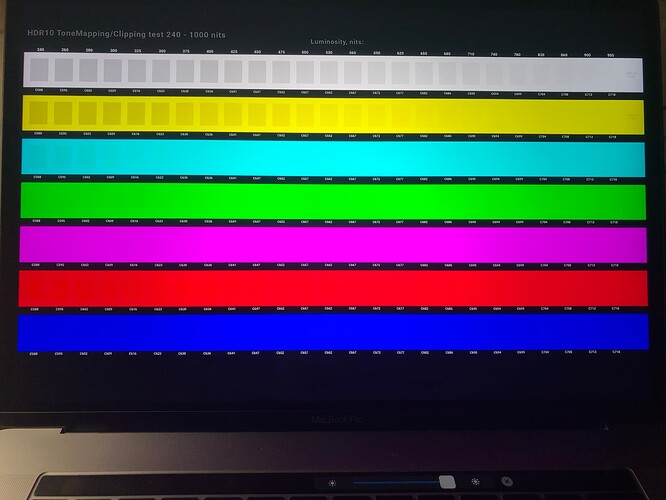 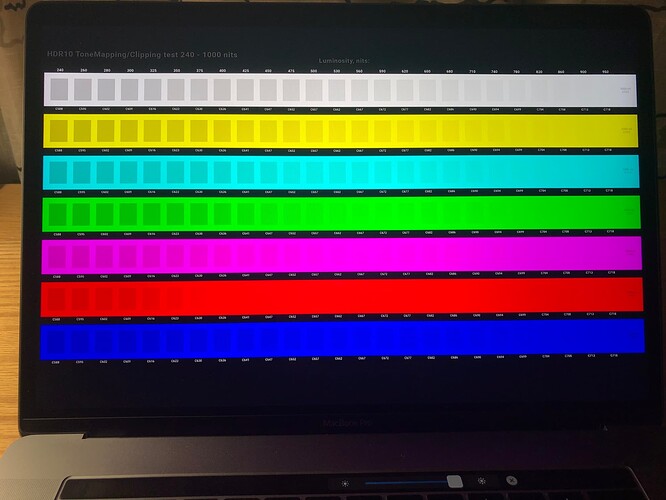 I tried it on my iPhone and iPad Pro, which all support HDR, the results are identical to the IINA case.

Therefore, I can replicate this issue.

I know it’s not a perfect comparison tool, but I took a photo of my screen with both QuickTime (top) and Infuse 7.3.1 (bottom) open at the same time, so screen brightness is the same. The slight difference you can see in the photo matches what my eye sees - the red and fuschia in particular appear blown out in Infuse. 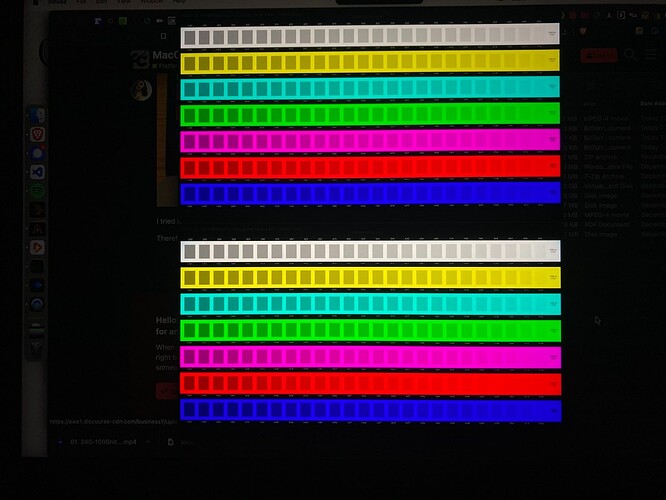 Today’s 7.3.4 update has some nice improvements for HDR accuracy on Mac.

We experimented with using Apple’s HDR palette (the same one QuickTime uses) but found this had rather poor handling of black levels, leaving most HDR videos appearing very dark with crushed blacks. Instead, we fine-tuned the Infuse palette and added a number of other improvements. The end result is an improved accuracy when testing calibration videos like these, and more importantly improved colors when playing back actual real-world content.

I appreciate the work being done here to fix and improve this issue, but shouldn’t Infuse strive for accuracy to video and color standards and the PQ EOTF curve, rather than tweaking it to preference?

Quicktime (which is the same video playback backend used when viewing purchased and rented HDR movies in iTunes and streaming services in Safari) seems to be accurately playing back all files, but even on 7.3.4, Infuse (while improved in this update), is not. The luminosity seems to be artificially increased, and all the color bars aren’t even, some are still clipping/blown out early. I’m also seeing dark border lines in some of the color boxes. You can compare this easily by opening the calibration video in Infuse and Quicktime and switching between the two.

Thank you for your work on this!

Thanks for the feedback.

The vast majority of people are much more sensitive to inaccurate luminance (dark vs light) than they are about color differences.

As I mentioned above, our original plan was to use Apple’s palette (via the same exact APIs used by QT). The result was perfect matching color boxes (like you see in QT), but this came the expense of crushed blacks in darker scenes. The difference when watching the same content back to back was pretty dramatic, and ultimately wasn’t going to be an ideal option.

HDR-tuning is sort of an ongoing, never-ending process (especially as Apple adds more and more devices of varying capabilities), but this update puts Infuse in a much better place with regard to accuracy.

The vast majority of people are much more sensitive to inaccurate luminance (dark vs light) than they are about color differences.

Luminance is indeed specifically what this test pattern is for, not necessarily color. It just simply splits it out into different colors to make sure each color channel is evenly displayed.

but this came the expense of crushed blacks in darker scenes. The difference when watching the same content back to back was pretty dramatic, and ultimately wasn’t going to be an ideal option.

Curious what this content you’re comparing is? Since that’s the point of calibration test patterns in the first place, to make sure everything from display to software is calibrated according to industry standards so that content is played back accurately to how the creators intended it to be seen.

HDR-tuning is sort of an ongoing, never-ending process (especially as Apple adds more and more devices of varying capabilities), but this update puts Infuse in a much better place with regard to accuracy.

But isn’t that the point of the HDR standards? HDR content will display to the max of each display’s nit capability, aligning with the PQ EOTF curve. And Apple calibrates each device’s screen extremely well. Then it’s up to the software to accurately represent the media.

I don’t mean to come off as combative or argumentative, so please don’t take it that way. It’s just as of now, Infuse on Mac will display HDR content differently to where you’d see it anywhere else on the same device, like the iTunes Store, Quicktime, Chrome, Safari or YouTube. Thanks.

Here’s a comparison of how 7.3.4 handles dark HDR scenes versus Apple’s handling we tested during development (I would download the originals using the link as I think the forum might compress these images).

Note: This may be an extreme example, but it can be seen to varying degrees in most content.

While I agree with all of your points, I would like to mention that this update is a significant improvement. On testing, it is much closer to the reference (Quicktime), and displays pretty much perfectly for me (14" M1). Surprised you had different results. Also, pretty much every other player displaying HDR content uses Apple’s APIs, so kind of hard to compare. The 3 different ones I’ve found are MPV based players, Infuse and Quicktime.

@james Doesn’t Infuse use Apple’s APIs on iOS devices though, so I’m curious why you aren’t matching that behaviour on macOS? (I’m not entirely sure, but I’ve noticed with the luminosity testson iOS it seems identical to the stock player).