I updated thread title as I’ve discovered the issue is not related to the number of seasons in a series but instead how one names the season sub-folders.

When browsing my library via the files interface (where season posters can be seen), my custom folder.jpgs are ignored — and replaced by those on TMDB. Why?

This does not seem to happen on other shows which have fewer seasons (though my next most-seasoned shows each have only 22 seasons).

More info on the requirements for this can be found here.

More info on the requirements for this can be found here.

In addition to the season poster “folder.jpg” files I had to add to each series folder since beginning to use Infuse (because otherwise when browsing seasons by folder the folder icons were blank) I’ve always stored copies of the season poster jpegs in the series’ root folders like so: 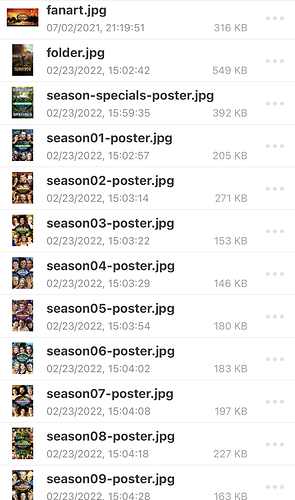 Rename ‘folder.jpg’ to ‘poster.jpg’ and you should be good.

Either of those seems to be treated the same in the season folder, but only folder.jpg works in the main series folder (for the series poster).

So I’ve been running a lot of tests to determine Infuse behavior on this issue (with a “use local metadata, use online metadata” metadata dump cycle in between each) and here’s what I’ve figured out.

What tripped up this series for me is that something seems to have changed in the way the FILES view displays folders when browsing TV show folders — why can I no longer directly see my folders as I’ve organized them on my server?

When I browse to my Survivor series folder

I no longer see the folders under “Survivor (2000)” as they exist on that share and as I’ve named them:

Instead, Infuse just pulls all video content from the main Survivor folder and dumps it all into the same “bucket” … only allowing me to view it on a per-season level after it is indexed (as in the library). This isn’t how browsing by folders should work. I should be able to open the Survivor folder even when “Use Local Metadata” is executed and still access the episodes in the folders I placed them in. I no longer can.

I believe this library-fication of the FILES browser is why my season-level folder.jpgs are no longer respected. Because I’ve included the season titles in the names of the season folders, Infuse no longer allows me to override images it draws from TMDB — even though it should, because my folder structure exists as it does for a reason …

and because even though my folder names say more than just “Season 1” and “Season 2”, Infuse has no difficulty recognizing and correctly identifying episode video files stored in those folders, as they use acceptable Survivor (2020) - S01E01 (other stuff).mkv file names.

This is not generally a problem with most shows in my collection so probably why I haven’t noticed it till now. Few series have specific titles for each season, and of those that do, I don’t feel compelled to explicitly use them for file management purposes as a series with so many unique seasons as Survivor calls for (in my use case).

In any case, the only thing I can do now to restore my ability to override TMDB’s season posters is to rename my season folders so as to exclude the season titles and restrict their names to Season 1 or Season 01 only.