Hi, I noticed, for a long time now, that when starting playback or resuming from pause or even skipping forward or back the player freezes with the rainbow cursor, this happens when playing content from Jellyfin media server (upgraded to latest, but happened also on the previous versions)
When I use HTTP Jellyfin acces or Jellyfin app this doesn’t happen.
In infuse I need to wait, sometimes even 10 seconds before it resumes
Video content is stored on NAS with an SSD disk, NAS is used only for Media storage, nothing else, I’m getting 500-700Mbit/s read speeds from NAS, so it’s not a network/NAS issue. 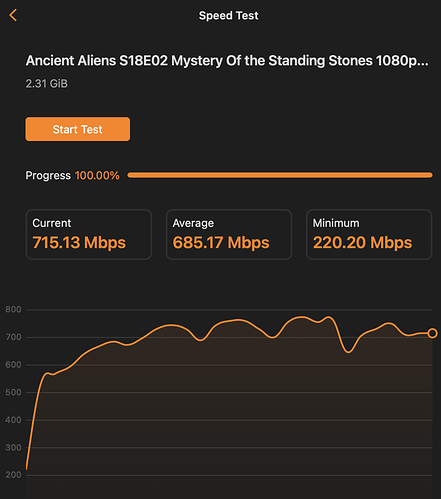 Happens to me too quite often.

When NAS share is mounted via SMB, playback of files works fine with IINA.

Can you please clarify your network configuration? Having an SSD in a NAS means the bottleneck is likely not your NAS.

Your network speed being less than 1Gb/s and fluctuating is indicating a wireless connection. Have you tried connecting your Mac to the network with an RJ45 cable to see if the same problem keeps on happening?

Not sure if this question is for me or OP, but I have full cat 6 everywhere, everything is at 1 Gbps. Though I have only HDDs in my NAS, the RAID can do about 600-700BM/s when scrubbing, and as IINA works fine for every file, I highly doubt it’s my NAS / network. It can be, but not sure why it only manifests with Infuse.

@Filip98 you’re right I wasn’t specific to whom the question was addressed.

I noticed different network protocols are not treated equally by software. The original poster said with HTTP Jellyfin the problem goes away. If you set up an emby/jellyfin server and try HTTP, I suspect your problem will also go away.

My setup is a little different so I can’t exactly duplicate your test conditions. My server is running virtualized TrueNAS with an Emby jail and is linked to my network with 10G copper. My M1 Mac Mini only has a 1Gb network port and when accessing my media library over SMB I have zero issues.

Did you check in case your NAS is going to sleep or something?

Oh, I might wanna add that I’m running Plex, not jellyfin, sorry.

Also, the issue doesn’t seem to appear on my iPhone when streaming media via wifi

NAS is definitely not going to sleep. I have plex library there, some docker containers from my Linux server etc., so the drives are never going to sleep

It’s fluctuating between 600Mb and 800Mb/s. This is not a network issue. It doesn’t happen on iOS. Happens on all Mac versions till this one and all previous Infuse versions. No other player has this problem playing from network. Also please bare in mind that Infuse actually caches the file for playback so when you actually pause playback, the part you want to resume is on the disk or memory (depending on caching setting in Infuse) and this happens usually when unpausing or skipping like 10-15 seconds forward.

@RadekB if we rule out the network speed and confirm HTTP access with jellyfin is good, then we would need a deeper dive into what’s happening. You would need to set up network packet capture and system debug log capture at the same time while you duplicate the problem, and then have those logs analyzed.

Not the ideal answer you want to hear, but from a pragmatic point of view, how much time do you want to spend fixing the issue if you have a functional workaround?

But how can you be sure it’s a network issue? Infuse is buffering right? So when I pause and unpause there should not be any freeze (Mac rainbow wait cursor) right? The video is buffered and on disk or in memory when pausing. And when unpausing it does not read from network? So what’s the use of of a packet capture? I can do this of course. But what’s the real benefit of doing this when it doesn’t seem to be network related?
I changed infuse caching from disk to memory and it still happens. So why infuse has problems resuming playback when the material is cached? It’s a read ahead cache right?

We don’t know what’s actually going on and doing debug log and packet capture will provide a glimpse. Doing debug log capture or packet trace alone will potentially miss the data that will point out what the problem is.

The infuse behavior is obviosly different from jellyfin and the only way to understand what that is is to capture and analyze data.

The other alternative is to find someone with a similar setup to yours that doesn’t have the same problem and look at what are the network/mac configuration differences.

But I fail to understand why packer dump is needed. I will do it anyway but for logic’s sake:

How do I go about in starting debug of infuse? Or is this just the normal report I usually send?

But I fail to understand why packer dump is needed.

@68ioqw23563e548 is just another Infuse user trying to help, they don’t speak for Firecore.

They are suggesting a course of action that may or may not be productive so if you don’t feel that it’s necessary then I’d suggest you wait until you get input from @james who is the head of Firecore. He may concur with the suggested course of action or he may have another thought on how to proceed.

In the past where I’ve experienced a pause similar to what you’re describing it was do to other processes starting when Infuse paused or wasn’t playing a video that required the bigger portion of processor time. You may want to look into what other processes are running at the same time as Infuse.

You might be right. But I’ve got the MacBook Pro, not the base model too, 10 cores, 16GB RAM… 1TB disk. No hiccups from other apps.
IINA player has no problems playing from network, same goes for VLC. Infuse for iOS or TVOS also has no problems. So I’m not quite sure it’s a Max issue. Although I sometimes see with Airpods especially that the sound starts playing several seconds after video starts. Even when headphones are connected. Maybe it’s related… who knows.

@RadekB it sounds like this issue needs to be duplicated by someone else so that a pattern can be established.

A user such as myself with an M1 Mac Mini (8GB) doesn’t have this problem. If we assume the Mac hardware is the same (or close enough in case of the M1/M2), then we have to look at other variables.

I just turned off Ethernet on my mac mini and connected to my network via WIFI, linked my media library over SMB from my server to Infuse. All of my 4K content starts playing immediately when I click play.

Well the thing is, at least for me, it happens quite randomly. Once I go whole 2-3 days without any hiccups, then several days in a row, spinning beach ball on pause / play every time.

CPU / Memory load is always good enough imo, I run a lot of Chrome tabs, but not to that point that my RAM is swapping like there’s no tomorrow.

It doesn’t seem to be affected by uptime. I have situations, where I have 2-3 hours of uptime, and it freezes. Then, I have 10+ days, RAM is full and swapping, but it it seeks and plays / resumes fine.

Let’s wait for james and his suggestions, to see what we can do tu further troubleshoot it.

@Filip98 if you are using wifi, the symptoms sounds like saturation on the channel that’s being used. Is there a way you could test with a network cable instead of wifi?

I use 1gbps Ethernet connection

was worth a shot…