The episodes here are formatted such as 1944x04, 1945x01, 1946x03, etc. If I throw all the episodes in a single folder named Popeye, or create individual folders named “Season 1944” and so on, Infuse doesn’t recognize them as a series and display as an episode collection.

With the year right after the name Infuse may be looking for a 1933 movie since you don’t have the “S” to denote “Season”.

If you follow the attached naming and file organization Infuse will pull all metadata and correct artwork for the series. Just tested it and it worked great. 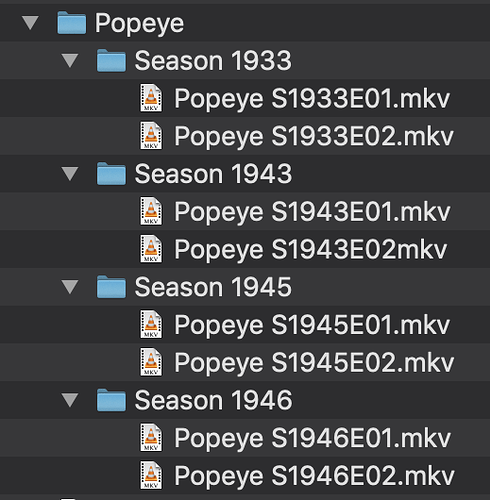 Thank you for the information. But …

Infuse supports a wide variety of naming formats, and will fetch info for most titles automatically. File Naming Styles Movies Note: Release year is not required, but it can be used for better resu...

Infuse supports the format show-name_1x02.mkv for TV shows. I have successfully used the SxE(Season x Episode) format for hundreds of other episodes so why won’t it work with Popeye?

I posted to bring this to developers’ attention since 4-digit season numbers aren’t recognized by Infuse for files with a 1x01 naming format.

And it probably would be fine for the 1x1 format but as I said above with it being a year and not a single digit it’s probably going to not recognize it as a tv show. The file structure and names I have in the pic above pulled all of the correct metadata and artwork. Also, if you notice TVDB also show the episodes at S1944E01 so that also helps eliminate problems with the 1x1 format and having a year after the series name.