I got the email stating “Free upgrade! Infuse 6 is a free upgrade for all Pro subscribers (monthly, yearly, lifetime).”
Okay, I have Infuse 5 Pro and I added Infuse 6 from the app store. When I try to play a video on Infuse 6, I get an ad page asking for money to upgrade to Infusion 6 Pro.
What exactly is Infuse 6? Is it just the equivalent of an advertisement page? Does it actually play any media? 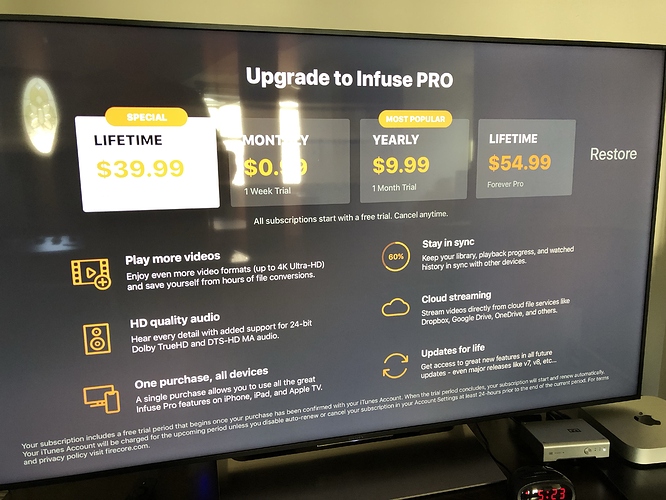 I’m pretty sure it won’t play anything with Dolby or any HD audio, and I think that 4K is not supported . There may be a few file types not playable in the free version also. I’d say it’s primary purpose is to show the user interface and play some basic files. Probably something like a mp4 with 2 channel audio.

This is a guess so I may be off on one or more.

The keyword is “subscriber”. You have bought the standalone version. So you should pay to upgrade to v6. Otherwise anything with licensed audio won’t play.

Still consider yourself lucky. I’ve just discovered from your screenshot that I’ve wasted some good money. Since you’ve bought v5 you have a nice discount to subscribe to the life subscription. I’ve instead got the yearly subscription and I’ve paid full money to upgrade to life. So a total of 65€, because in the meantime Firecore even raised the prices.

PS: I don’t understand why Plex is allowed to play DD/DD+ for free, though. As I thought the Dolby 5.1 license was part of tvOS since it plays it.

It’s the decoders you are paying for. Apple TV has a decoder to playback Dolby digital but not Dolby TrueHD (and dts HD). Plex does it’s audio conversions on the server end and I assume they use open source libraries…