My Infuse 5 is now crashing when I play certain MKV files. Most of my files are MKV and Infuse plays some MKVs and crashes with some MKVs. Every single one of the files that currently crashing Infuse did at some point in the past play perfectly. This is a recent problem.

Can you try installing Infuse 6 and see if the same problem is present?

Infuse 6 includes a number of optimizations for iOS 14 (and iOS 13).

For v5 users there is an upgrade path to v6.

For a limited time, v4 and v5 users can receive a free year of Infuse Pro when upgrading to Infuse 6. To take advantage of this follow these steps. Install your latest paid version of Infuse (v4 o...

The upgrade option on Apple TV goes straight to the apple ‘buy’ page where you pay for the app. No option for a free year upgrade. I definitely have Infuse Pro v.5.

No option for a free year upgrade

Just to verify, you do have Infuse 5 installed on your ATV first and you downloaded Infuse 6 (not Infuse 6 Pro) and when you go to the upgrade in settings you get sent to the App store or do you see the Monthly, Yearly, Lifetime options?

Correct. I’ve tried this on the ATV and also on the iPhone with the same results. I see the Monthly, Yearly, Lifetime options but nothing of the free year.

Can you show a screen print of what you see on the ATV Infuse settings screen in Infuse 6? Of the monthly, yearly, lifetime screen 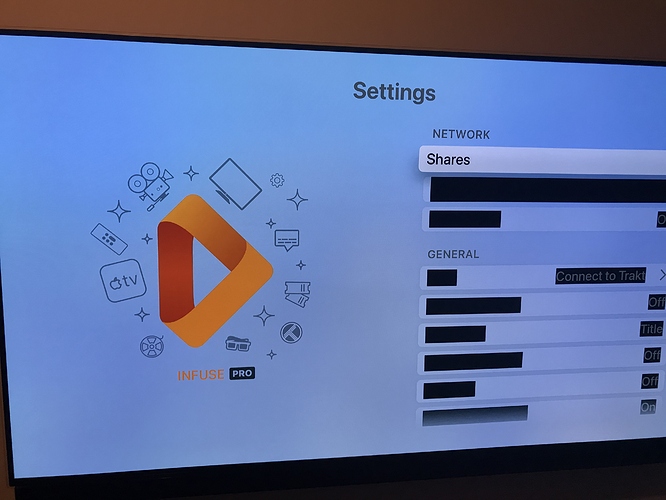 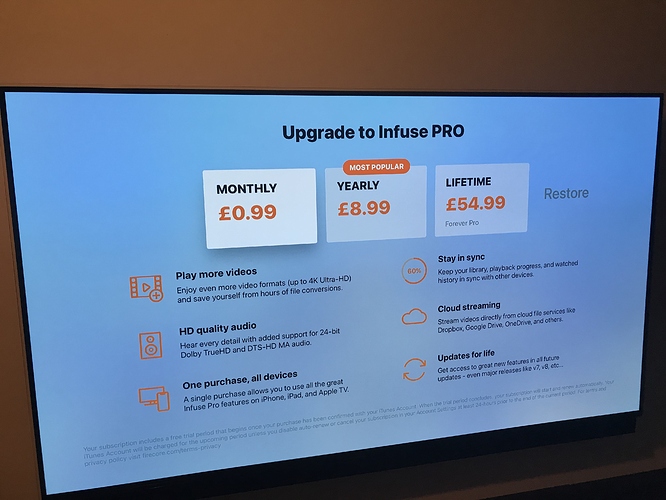 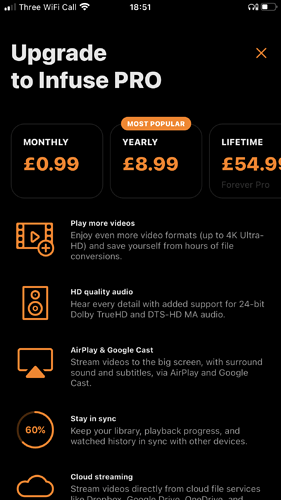 So you can see a picture of my Pro v5. It’s not happy. It’s properly broken and crashing all the time.
And you can see pictures of Infuse v6 (normal version) with no option for the free year upgrade on ATV and iPhone.

Did you every start a subscription to Infuse 6 and then cancel it? I thought I remembered you having some other issues with v5 and you were thinking of going to 6 back then.

Yes. Ages ago I started a v6 subscription but when back to v5.

That’s probably why you’re not seeing the free trial. I think that’s only for new users coming from v5.

Okay, thanks. I will subscribe to v6 for a month to see if problems are solely with v5.

Apple only allows a single trial per Apple ID.

If you PM me a copy of your Infuse 5 receipt, I can send you a code for a 1 year license of v6.

I’ve found the receipt and sent you a PM.

So I’ve installed the Pro version of v6 and all the videos that were causing v5 to crash play as normal whereas the videos still crash version 5.
Has support stopped for v5? My cover gallery is completely messed up in v6, this is the reason I reverted to v5.

My cover gallery is completely messed up in v6

When you say messed up what is wrong with them? If it’s a wrong match then once you make the correction it should keep the corrections in iCloud so if you have to rebuild things it will remember what you have fixed.

For example, some of my covers are being picked up and other covers are being ignoring in favour of the default cover that is in TVDB. I find this a little confusing, shouldn’t all the covers behave in the same way?

I haven’t changed a single location for the cover so it’s weird the covers in v5 and v6 don’t behave in exactly the same way?

the ones being ignored, I’m assuming these are jpg files you’ve added to the same folder as the movie is located in. One thing to check is to make sure the Movie file name is exactly the same as the jpg file. I had some that I had changed to movie file for a better rip and the file name was just slightly different but the local poster was no longer used until I changed the name of the jpg file to match.

Everything inside the ‘Movies’ favorites works perfectly. It’s the folders inside the TV folder that seems to be giving me trouble. I have given up trying to change the artwork for individual seasons (nothing I’ve tried works even on v5) but on version 5 I was able to change the artwork for TV series and most of the TV series do recognise my artwork but a small percent is ignoring my artwork.

I have the artwork in the root of the main TV folder, I am going to try putting the artwork inside the folder of the TV series itself to see if anything changes.

Everything is okay at first when I clear the metadata/cache. The folders refer to my artwork but over time as images are cached Infuse starts swapping out my artwork in favour of artwork from TVDB. This only happens in the TV main folder. It doesn’t happen at all in the main Movie folder.

Seems to work. Hopefully, this bug (and it’s a bug that it doesn’t work in Infuse v6 (works fine in v5) can’t use custom artwork in a TV Show folder.