Hi, I was exploring the new Shorts library feature and noticed one film that shouldn’t be in there. Southland Tales is a BDMV folder in my collection which Infuse thinks is 35 minutes long. Its actually 144 mins long. I’ve tried refreshing the metadata with an Edit, but I am unsure if this causes Infuse to scan the physical media file again. Any thoughts anyone?

PS. Ignore the file after Southland Tales. This is due to a bug with Infuse ignoring the Extras folder in certain circumstances. It only affects one of my movies.

Could the BDMV have a reference to a 35 minute extra feature?

Yep, its picked up a 35 minute extra as the feature. Will investigate further and decide whether its just a bad rip, and if so remediate with a clean handbrake rip

OK. Gone back and confirmed that there is nothing wrong with the BDMV folder and Infuse is picking up the video track with the second longest duration rather than the feature. Once I hit play, I am able to go into the Video menu and select Title 113 (the main feature film). This is the only instance of this in my large collection. Very weird. Anyone else seeing odd entries in the “Shorts” category? 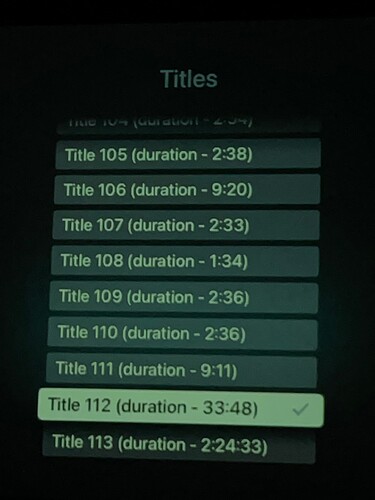 I would guess that Southland Tales will probably show up in both the all movies as well as the shorts category. Also when the new “features” category arrives (per the upcoming features post) I’ll bet it shows in both since it has both a 35 minute video as well as one over 40 minutes.

Pretty sure the way it works, only a single title from the BDMV will get indexed in the Infuse library. 99% of the time, the feature length. In this particular case, the 35 min extra. Maybe if I change the folder name and back again, it will re-read the volume correctly and pick up the title with the longest duration.

Can you try using the Edit option on the affected title(s) to see if this helps?

This will rescan the specs which may get things working.

Edited the movie and reloaded media specs but no change. It still chooses the 35 min extra as the main title.
Do you use ffprobe for enquiring on media structure and info?

It still chooses the 35 min extra as the main title.

Are you talking about in the favorite when you play it or when you’re looking at the “Shorts” catagory in Library?

I simply searched for the movie from the home screen, edited as per James’ advice and played the indexed movie. Surely the “shorts” category is just a filter that registers any film content <40 minutes

Just brain storming a bit, did you by any chance play the video when you saw it in shorts? If so I wonder if Infuse took that as the track you preferred to play for that video.

The other thought is could the primary track be encoded with a different codec that Infuse can’t play? Maybe the mediainfo full report would shed some more light on this.

Yes, I did play the title when i saw it in the Shorts. I then pulled down the Video menu and selected the longer 2+hr title. If you quit and play again, it keeps going back to the title that Infuse has indexed, that being the 35 min extra. Thats why I thought if i rescan the media file again and current Infuse has used a latter version of ffprobe than when I scanned in the complete library, it may rectify the issue. Although, i did complete a full rebuild of the metadata DB after cast and crew picture functionality was released.

MediaInfo will not show me the contents of the BDMV folder. Just says Blu-Ray movie (BD-Java). I assume it would be encoded in either SMTPE VC-1 or MPEG-4 AVC (H.264)

Thanks for putting up with the ramblings of an ol curmudgeon! It’s worse that a crossword puzzle when strange issues like this pop up.

Maybe @james will ask you to upload it so he can try it out and see if he can duplicate it when his day slows down a bit.

OK, gonna lay this one down to rest and just say its one of those things we cant do much about.
My confirmation is via looking at my movie collection in TMM (v4.2.5.1) after a complete DB rebuild. Pretty sure it uses ffprobe to gather media info and it has listed Clueless (BDMV) as 18 mins, Death Proof (BDMV) as 31 mins, Only Lovers Left Alive (ISO) as 34 mins and Vampires (BDMV) as only 2 mins. It also has the X Files movie (BDMV) as a whopping 349 mins. Infuse also struggles with Clueless (no runtime provided) and X Files movie as 65 mins. So, sticking to mkv and mp4 single title rips seems to be the best way to avoid this nonsense.

@james , letting you know that v7.4.5 seems to have corrected this problem. Southland Tales is now showing the correct movie length. I thought I would retest as I noticed a revision to BDMV logic was mentioned in the change log.