Sometimes, I’ll acquire a show without subtitles (or with poor-quality subtitles) and need to utilize Infuse’s great OpenSubtitles search and download feature.

Sometimes, it’s hard to find a good subtitle:
Consider, for example, the 2019 French/English series “War of the Worlds”.

I’ll be looking for a single subtitle track that combines both accurate English translations of the spoken French scenes (.forced) with accurate English subtitles (preferably the SDH/HI versions) so that I don’t need to keep switching back and forth between the two.

S03E01 has such a track among the four currently listed — the one that ends in “GGEZ.English.srt”

S03E02 does not (best I can tell) have any tracks like that among the 7 currently listed.

Sometimes with such shows you’ll think you’ve got a good one only to realize that the English subtitles were translated from the French dub of English audio; and twice-translated doesn’t make for the best subtitle.

As I download subtitles trying to find ones that work (or a pair to flip back and forth between, if necessary), there’s no way to identify which track is which; or which tracks in the list I’ve already downloaded. All I see is this: 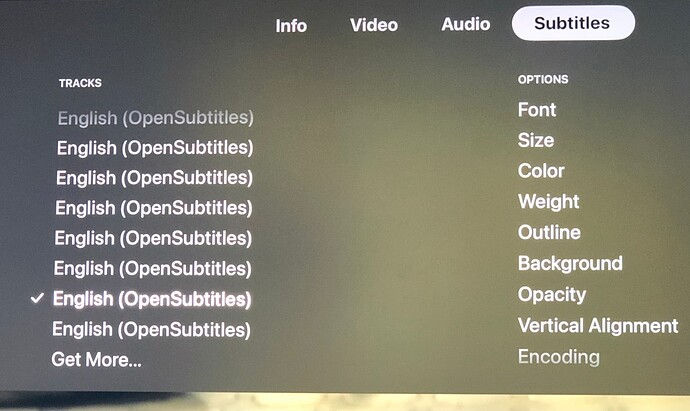 If I find a track that works for (say, the French Audio), but had to download several to find it; and then download several more trying to find one that works with the English audio; I’ve got no way of knowing which pair to toggle back and forth between, because they all are labeled the same.

I can delete ones that don’t work; but deleting a bad subtitle de-selects the last downloaded subtitle you were viewing that might have been one of the good ones. So then you need to watch them all over again and tediously figure out which ones to delete and which to keep. Without distinct labels, this is hard to accomplish.

There’s also no way to identify in the list of available subtitles if I’ve already downloaded any given item in that list yet. So I find myself downloading the same subtitle multiple times.
A simple “

” (check mark) to let me know I’ve downloaded a given subtitle file already would be helpful here.

I don’t understand why that would be allowable.