It makes me totally sick.

Whatever I do, I can’t get Hawaii Five-0 2010 (all 09 Seasons aired in germany so far) out of “Others”.
I tried it from Hawaii.Five0 to Hawaii Five-0, with “.”, and without the “-”, I tried it with 2010 and without the year. I doubled checked the spelling of all Titles via Filebot 4 times now. I tried it with german titles and with english renaming. No chance. No covers. No titles. Not even a TV Show in Infuse.

Renaming it inside Infuse with Metadata don’t work either.

ANYONE pls - what’s the correct naming of this damn show? It drives me nuts…

This is one of “those” series names that takes a little tinkering to get.

I got it to work with the file name “Hawaii Five-0 2010 S09E01.mkv” but you have to do an edit metadata and select the correct series after you change the name to this. Once you do this Infuse will remember the correction from now on and future episodes you add should pick up the metadata automatically.

Any more / other suggestions? Ö 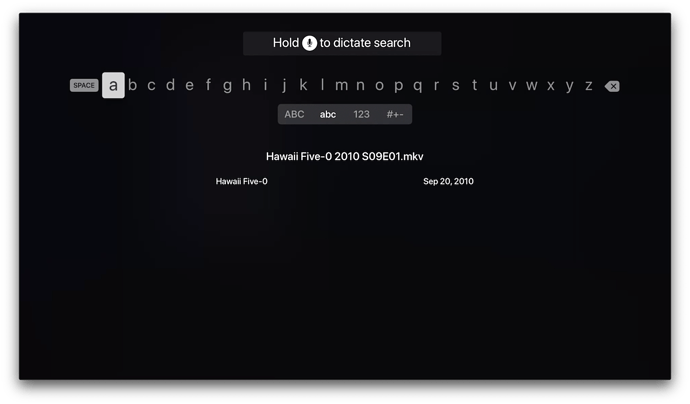 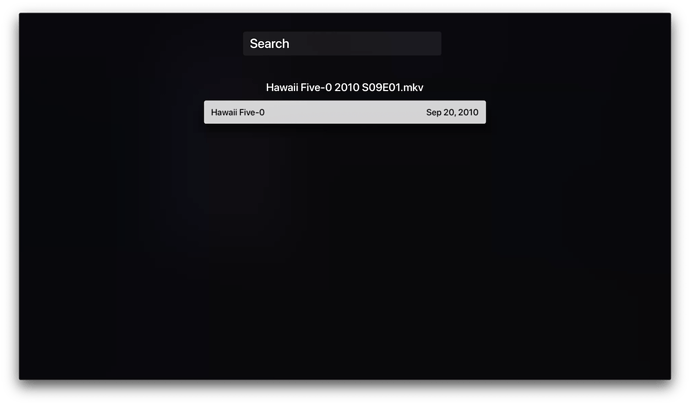 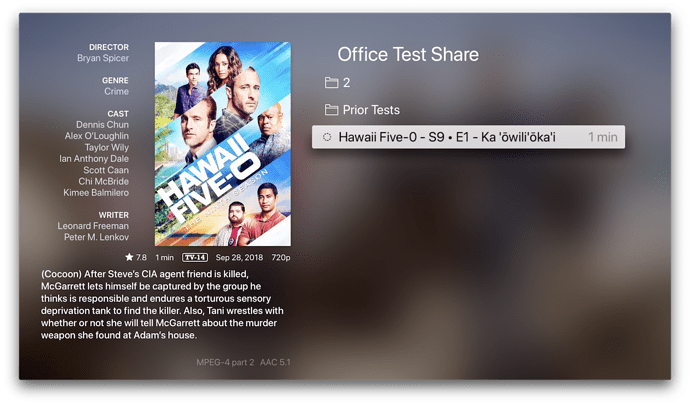 This should carry over to the library after it has a chance to re-scan for changes.

First two pictures I can confirm.

But than nothing happens.
I already rescanned twice after this and waited a bit…

Still under others. No matter what, it won‘t even recognize it as a tv show… ://

But than nothing happens.

What do you see next after scrolling down and clicking on the Sept 20 2010 date?

This spinning little symbol for like 2 seconds.
Than I am back at “Others”.
No error, no feedback.

I renamed Star Wars 9 just for the fun, it landed in Others. I did a Search for Star Wars Episode 9, it succesfully renamed and moved to Movies. - so Internet etc. is fine.

And what do you see in “Others”? is that episode still there?

Yes. As said, nothing happens

Maybe try renaming the series folder to match the episode?

Instead of doing the edit metadata from the “Others” section could you try navigating to the favorite where these files are located and see if you can do the same there and if it then gets the metadata in the favorite?

Maybe try renaming the series folder to match the episode?

Can we hang on just a minute or two to see if what I’m looking at may work? I don’t want to get two different changes at the same time and not know what’s causing the results.

I only find this in Others.

Is there a other place to look for?

If I access this from main menus I end up in the Menü with Movies, Shows, Others

When you created your shares to infuse you then were prompted to add favorites. There should be a favorite that you added on the Infuse home screen that when clicked on shows you the folders and or files you added.

Since I can’t see your home screen do I understand correctly that on your home page you have at the top a row of large posters that may be labeled as Up Next or Watching and then below that row there should be another row of smaller icons, are you saying one of those is labeled TV and is this the favorite you have the three folders of Movies, Shows, Other?

Is the very first icon in that row labeled Library?

While doing this Metasearches my Metadata Filesize literally explored from 215mb to 2,5 GB in 4 hours.

I deleted them all now, as my icloud storage was full.

Now, after the program rescanned - everything is out of order.

It’s maybe more an issue with Infuse 5 Pro and moviedb / tvdb than a problem with Hawaii Five-0 in special?

phew … this is so sad

I guess I deserve part of the blame.

Are you running Infuse 5 and not 6?

The movies magically grouped back by them self. That can be erased from the list.

; I am such a nerd with organisation …)

Oh. edith: I tried metasearch from the other location you mentioned - didn’t helped.

That’s the biggest drawback, there have been numerous changes to both Infuse and the sources for metadata that you may not be able to do a whole lot compared to V6.

That’s what I get for “assuming” you were running V6. But since this was your first post in the forum I thought you were a new user. Sorry about that.

You may want to consider upgrading to a V6 Pro subscription (lifetime is the way to go in my opinion) so you can take advantage of all the new features and improved metadata fetching and displaying.

Can I test with infuse 6 free if it works / solve the issues and is worth the second buy?