I bought a new TV (Panasonic 65LZ1500) and I downloaded 2 movies to try out: Forrest Gump & Jurassic Park in HDR. Both are more than 35 GB file size.

I have 300 Mbps wifi speed, which I often get on my Mac mini & MacBook Pro.

I plan to use hardwired ethernet but I need to pull the optic fiber around the door.

What is the recommended speed or file size for wifi?

I tried also files under 10 GB and no issues at all. It seems it’s only on huge files.

You’ll most likely be fine at 300Mbps.

There’s no set speed or file size for Infuse to play great. There are tons of variables that go into the proper playing of any video file.

You didn’t say what problems your were having with the files larger files. What problem are you having?

Did they resume after the freeze or do they hang?

Could you provide a screen cap of the graph after a speed test in Infuse on one of these?

The video stops playing for 2/3 minutes and there is a “loading” icon.

Here is the graph: 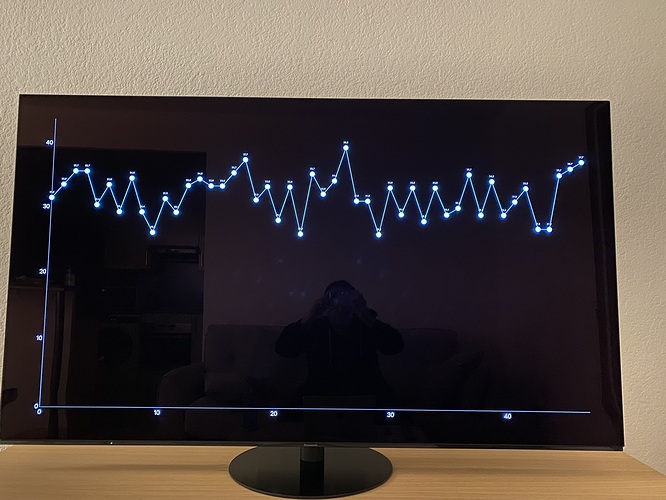 Indeed, 300 Mbps is my ISP speed but I reach it often with fast.com speed test. I understand Apple TV and the data flux is different.

I use SMB protocol, set up at Auto.

SMB protocol, set up at Auto

Your ISP speed doesn’t affect your streaming speed in Infuse unless your dealing with a cloud service.

I’d suggest you try some of the options suggested here to get better speeds on SMB first.

What ATV version are you running and also what are the specs on the video you’re having problems with? 4K x265 HDR etc?

For starters, Mac’s have much larger antennas and support more connections to WiFi. While a Mac can peak at 1300Mbps for WiFi 5, Apple TV will only hit 866. In reality the most you will probably get is half of that. Then you have to factor in the streaming protocol. If you have really great WiFi connection you might be able to get 200-300Mbps which will work for anything. But with just a moderate connection that could drop to 100 or below which won’t cut it for many 4K blu-rays. It would still work for anything from. streaming. Definitely go hardwired if you can.

For best wifi performance only one device can be on wifi. It’s recommended to use Ethernet on the device serving the files. If both devices are on wifi you’re only going to get half speed. Your wifi speed is shared amongst all devices.