For Srt subtitle files, <br /> code does not work

I can’t write code exactly, because it think that I wrote
HTML code. So I’ll use ( ), instead of <>

It works on smi files but only srt files doesn’t work.
When I say doesn’t work, it mean’s no line break.

On IOS devices, I see them as following.
“when I say doesn’t workit mean’s no line break”

This is not happen to Plex or other media player. (VLC, potplayer or so on)
It only happen to Infuse.

One way to fix this, install subtitile edit software.
Delete every single
coding and make them doubles line using enter key on (br /) spot.
But you have to edit one by one which is mind boggling.
Replaces all does not work on this.

When you delete
and hit enter It still creates same exact
coding.
But this somehow it works on Infuse.

I was afraid, you wouldn’t understand. So I attach the files for it.
Can you please take a look at it? 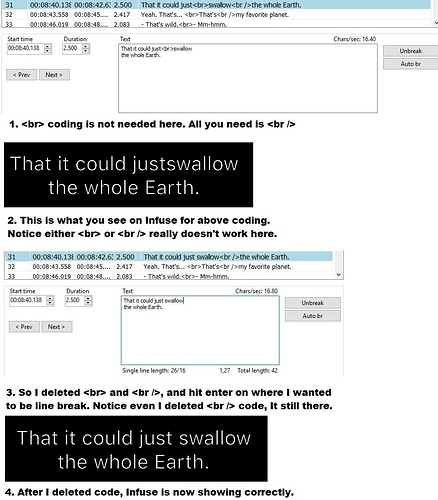 I believe SRT subtitles should be using the CR+LF pair for line breaks instead of the HTML version.

More info which may be helpful can be found here.
https://matroska.org/technical/specs/subtitles/srt.html
https://srt-subtitles.com

We’ll take a look and see if (br) tag support can be added for an upcoming version.

Support for BR tags has been added for the upcoming 5.9 version.

Thanks for the report.