How does Infuse handle Blu-ray rips with HD audio formats converted to Flac surround in a mkv?
Can it output the lossless FLAC Surround audio losslessly as LPCM?
Is there an option to down mix 7.1 to 5.1?

Anyone here able to answer this? Would like to know some basic functionality before i purchase a licence.
Thanks in Advance.

Yes, with Infuse’s ‘Audio Output’ option set to Auto, all audio will be passed without any loss of quality as LPCM. Discrete channel counts are kept as well.

This applies to all audio formats, including DTS, Dolby, FLAC, AAC, MP3, etc…

Thanks James, Thats great for my setup. one last thing that would be perfect is the ability to downmix 7.1 to 5.1 output as thats what my receiver needs to see. Is this possible currently or if not then planed for a future update?

If you’re connected to an AV receiver, Infuse will send 7.1 audio (or the number of tracks that are present in the video). It’s then up to your receiver to determine how to handle this. In most cases it will simply drop the extra 2 channels and send 5.1 audio to your speakers. However, some DSP programs will mix the 4 surround channels into 2 (or some other combination for less common channel layouts like 6.1).

The one exception to this would be if you’re connected to a TV, or another device that only supports 2ch audio. In most cases, the Apple TV will be able to detect this and Infuse will adjust the audio output accordingly.

So is that a NO to both questions? I have a Meridian 861 V4 that specifically needs to receive 5.1 LPCM no matter what the original was, Be it 5.1 / 6.1 / 7.1. Using an Oppo blue ray player it is possible to down mix to the selected format e.g. 5.1. Can this be done currently or if not will it be possible in a future update.

Thanks for your time,
Robert

No, it’s not supported at this time. Anything is possible for the future, but if I’m honest you are the first person I’ve seen to request this.

I’m not familiar with your particular receiver, but what happens if it receives 7.1 instead of 5.1? You should be able to test 5.1 and 7.1 FLAC in the free version if you want to give it a go.

There’s a few of us out there believe me. I haven’t tried to find out but i will. I was just flowing the manufactures and other’s directions for how to set up the HDMI processor that connects to the 861 and haven’t deviated from this.

Thanks. Please report back if you have a chance and let me know what you find.

If there’s a valid use case out there it’s definitely something we can look into.

So far what I’ve found out is that the HDMI processor will “Advertise” the amount of channels it need’s and the source should down mix if needed.
Indeed this is what would happen when using a Oppo Blu-ray player.
Here also is the page from the manual saying the same thing. 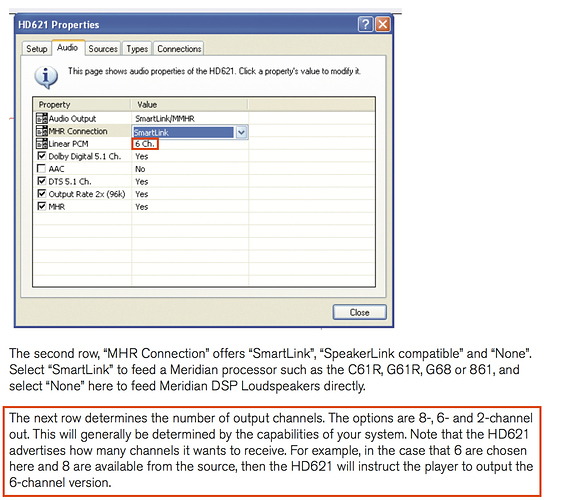 Interesting, I don’t recall the specifics of our implementation offhand, but if the Apple TV is able to recognize the EDID info from your receiver then it likely may just work.

As far as I know, most mainstream receiver models don’t use utilize EDID for audio. Case in point, we have a Yamaha RX-A1050 here that is set up as a 7.1 system, but we’ve also created an alternate profile to allow it to run as a 5.1 system for testing. Infuse sends lossless 7.1 audio to the receiver (which is correctly recognized) and the receiver then simply ignores the 2 additional channels, and sends 5.1 to the speakers. I suppose this behavior can vary a bit between devices, but we haven’t had any problem reports related to this since our LPCM implementation was added in April.

FWIW, each discrete channel gets tagged when it leaves Infuse (Front: L C R, Side: L R, Back: L R, LFE) so the receiver knows exactly what each incoming channel is, and where it should be directed to.

From what i can gather dropping a channel when going from 7.1 to 5.1 doesn’t give you the optimal mix. Down mixing the rear channels from 4 to 2 is ideal. James When you get a sec can you find out how you guys have implemented EDID in Infuse and if it can down mix 7.1 to 5.1?

Thanks for your time,
Robert

The downside to mixing 4 surround channels into 2 is that you lose the discrete channel characteristics, along with some quality, which isn’t really ideal.

Also, while Dolby and DTS give us mixing parameters (recipes) for down-mixing 7.1 and 5.1 into 2ch stereo, I’m pretty certain they don’t provide an option for combining rear surround channels. This, unfortunately, means we wouldn’t be able to maintain our certifications if we chose to implement our own down-mixing recipe.

Thanks James, Were you able to find out how Infuse handles EDID messages?

I can’t say for sure since EDID is handled on the tvOS level, and we don’t have any devices that specifically request 5.1.

Have you had a chance to try Infuse with your setup yet? What were the results?

There are a number of sample files linked in the first post of this thread as well.

Update 4/4/16: As of Infuse 4.1, all audio issues have been resolved. Infuse now supports Dolby AC3/E-AC3/TrueHD and DTS/DTS-HD MA. More info on the available audio options can be found here. For those looking to test their system, a number of sample videos of varying quality and channel count can be found here. Dolby - DTS - Channel Test 1 - Channel Test 2 Update 4/4: 4.1 is now live! https://firecore.com/blog/14683 Update 3/30: 4.1 has been submitted to Apple. Update 3/17: We're working to…

Thanks for the link. I have a few test files I need now. Just an update on what I have learned. The decoding player in this case Infuse does infact need to do or should do the downmix according to the standard down mix coefficients set out by Dolby or DTS unless there is a non standard downmix coefficient embedded in the metadata to which it should then follow that. Most use the standard though. So hopefully someone will be able to confirm how infuse handles downmixing.

Well slowly setting up my system, Its a bit more complicated than a standard setup with comm cables as well as digital cables to all speakers, Firmware updating and such.
But Im pleased to report that even with only the front 3 speakers set up everything seems to be working as intended. Cant fault the down mixing even with the metadata extracted form multichannel flac files! Everything sounds great and is reaching the HDMI processor unmolested and getting up sampled before being passed on. Will se what happens when I add the set of rears but i can’t see any problems other than if it doesn’t attenuate -3db due to mixing of the rear channels but we will see. All good for now.