Is the fix included in any of the betas ? Because it doesn’t seems so and I would love to verify it.

It’s almost 5 months later since I reported the issue, I wouldn’t hold my breath.

This is on our list, but requires updating a number of core items.

It should be available after the release of Infuse 7. 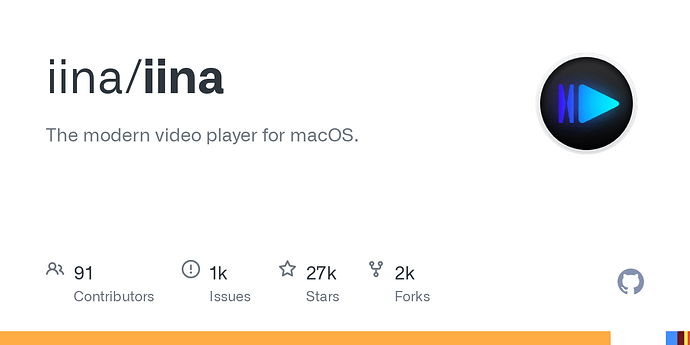 The modern video player for macOS. Contribute to iina/iina development by creating an account on GitHub.

This thread has been marked as planned. You can check upcoming feature list here:

Still no updates for this?

This feature is listed in the 7.X range so it’s on the board but may take a bit.

Waiting (at least) for this feature.

devs any realistic plan for this request ?

I’m guessing they want to fix the existing bugs before they do significant core improvements to audio and video areas. Easier to track new bugs and revert back if needed.

As the OP and my 2nd post showed a similar fix done by Videolan VLC, I think this isn’t a significant change to Infuse audio core. The status did change recently to « in progress » so maybe another few months?

A post was split to a new topic: Dolby MLP codec suport

Did I interpret this correctly? Time to dust off whatever I was doing a year ago

Did I interpret this correctly?

That would be cool. At one point this and other features would show up in a future release but then kept sliding into the future. Though I also noticed you changed the title so it must be imminent

I think I recalled why I reported this, I was doing some DoVi Profile 5 processing with true HD. This and along some future Infuse DoVi support may position infuse nicely - at least targeted to ATV 4K Infuse users with DoVi media rips that want HD audio in mp4

Congrats & Thanks. I re-tested the same file and voila: Dolby True HD 7.1 sound !