Yes, there’s only 30 likes and we need everyone to push this forward as I think we’d all benefit from having options.

and now all the work was for nothing!

Wait; what just happened? What feature was downgraded? Do you mean “now” as in last year, when Infuse had to switch to TMDB and you lost what you’d entered into TVDB? When did Infuse last / ever support custom .nfo for television series? Because that was something I had to come to terms with when choosing to use this software … and yeah, it sucks … but I don’t feel like they took something away since breaking up with TVDB?

Would very much like greater support for custom (local) .nfo to be added, though, definitely.

For whatever reason, Infuse seems to allow local .nfo for movies to override more tags than it does for tv. Wish they’d publish a full list of exactly which ones. And added support for respecting local < sorttitle > tags.

As for work down the drain … looks like 7.4 getting rid of the TV season select page is going to negate all the hours and hours of work I’ve done collecting and creating custom season poster artwork (and uploading much of the same to TMDB when needed). However, I’ll take the loss in exchange for a much more useful UI.

Since the Actors Pics has been introduced, it’s not possible anymore to override or add own Cast&Crew with NFO…

I’m glad I never went up to a 7.x version. And I’m missing nothing except those features we are waiting since years. If your ATV is jailbroken then you can easily downgrade to an earlier version direct inside the AppStore. The checkra1n jailbreak is very easy to implement.

It’s very disappointing, that they have no ears to their users and instead of improve features like the NFO/XML edit, they are killing it.

The fact that Infuse doesn’t recognize XML files for TV shows is ridiculous. Seems like you’d want your software to be able to support some sort of local metadata just in case TMDb (or whatever future source it might use) goes offline. At least then people could have the local data. (Perhaps even a way to download the metadata and store it locally as XML would future-proof things, but that’s too much to ask when we can’t even get it to read the XML in the first place!)

I had some shows entered on TMDb, but they went and mass-deleted them all because they aired on the Internet (on TWiT.tv) instead of a regular broadcast channel…but apparently streaming shows from Netflix, Disney+, or Twitch (in the case of Critical Role) are just fine. (These TWiT.tv shows are listed on IMDb and TVdb. It’s just TMDb that seems to have a stick up their butt about it.) I REALLY hate the double-standard TMDb has going…but those megalomaniacs can’t be reasoned with.

If I could generate my own XML by hand, this would all be so much easier…

The complete list of supported tags (for each category), however, is nowhere to be found.

Here’s overridden TV episode titles for “Firefly” (that I did because alternate episode order similarly isn’t yet supported): 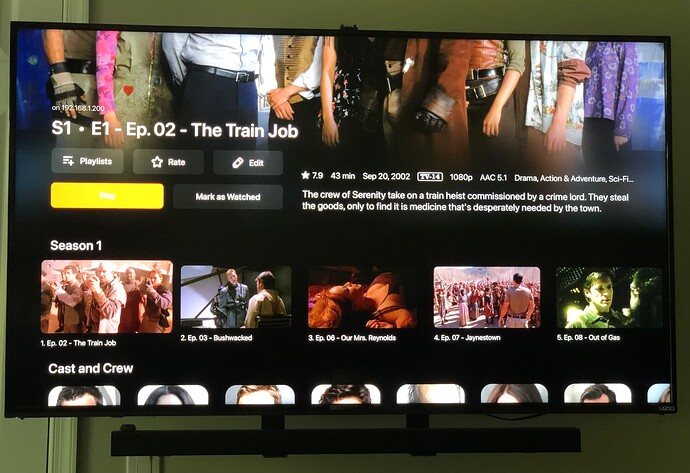 I’ll go straight to the point, sorry if it sounds rude. I can’t believe how you just don’t care about your customers feedback. New version is out and this feature is not resolved? Are we just a joke to you? I’m sorry but this is too much. Fix that once and for all.

Infuse has really done a bad job on this issue

When is metadata XML or any other means to regulate the library yourself (!!) being made available. Since the embrace of TMDB half of my library had become crap because of them and their antics.

I want to be able to control my entire library, without being subjected to the wings of external parties.

When is metadata XML or any other means to regulate the library yourself (!!) being made available.

I moved your post to a currently running thread on this. This suggestion has been tagged as “planned” so it’s most likely not far off.

it’s most likely not far off.

Says the guy who’s been here for six years … so, what he might maybe mean is … “not far off” (as in compared to how long folks have already been waiting

).
In geological time, it’s right around the corner!

I was also looking for different solutions to this problem. I also have several rather unknown tv shows or home made videos like birthdays.

I never was able to organize those via Infuse adequately.

Now this issue has the tag “planned”, which is great, but I don’t have clue what that means for the release cycle.

I really was about to analyse the data traffic between Infuse and TMDB and see if I can get some info how it works.Together the with API documentation of TMDB, I might get a middleware working which intercepts the API calls to TMBD. It would then check if the API call is for a custom tv series and if so, delivers custom configured meta data to Infuse. All other API calls go to the TMDB. Like a small custom self-configured TMDB server software which we can control easily.

Since I don’t have much time at the moment, I did not start this small project. And now this issue is “planned”, so it might not be necessary anymore.

I was also looking for different solutions to this problem.

The only way I can see to create your own files is find a series on TMDB that has enough seasons and enough episodes per season that it would suit your purposes, and then name your video files such that they will scrape as episodes of that season:

And then you can add custom posters (folder.jpg) and fanart (fanart.jpg) and thumbnail images (-thumb.jpg):

And to go one step further, create custom .nfo files for each episode:

and change the <title>, <showtitle>, and <plot> tags so Infuse displays your desired title of your home movie “series” and “episodes” instead of “Survivor” and details about the episodes of that show.

Tedious, to be sure.

Or, you can just browse your home videos via the file browser and uncheck the favorite where they reside in Settings/Library so Infuse doesn’t try to index them.

Don’t try creating a new series at TMDB. They’ll axe it for sure as soon as they see it.

That seems pretty harsh using the show “Survivor” for family videos, Why not the series “The Family”?

I’ve been able to create an .NFO file for my movies that work just perfectly. Everything is showing: Plot, actors, directors, writers, everything.

I’m not home, but when I’ll be back, I will upload it for you guys.

Something really important here is to NOT MOVE any tags. I’ve made some changes to the tags position in the .NFO file and nothing is showing in Infuse. So just change the information and save.

I use the same .NFO file for my Tv Shows, but no success. Does someone have a working .NFO file for their Tv Shows that he can share with me ? That would be very nice.

And thank you to all of you for sharing your test and result, we gonna make it work

I use the same .NFO file for my Tv Shows, but no success.

That is why this thread is in the “Suggestions” forum. It’s requesting that Infuse support NFO/XML files for TV shows like it does movies.

Note that this thread is tagged as “Planned” so it’s on Firecores radar.

Sorry I was too excited for my movies (was not working for over 3 months).

Can someone explain me the issue, because I don’t understand…

What’s not working:
1- Your own metadata stored on your server (NFO/XML) for Tv Shows to show your plot, cast, genres,etc…

2- When you go to settings → Library, you want to see the correct number for tv shows.

Let me know because I just finished working on a XML file for my tv shows and I see everthing I need: plot, cast, genres,etc… Everythings is perfect (but TV Shows says 0 once in settings → Library).

The TV show do not list as a TV show.

With some tricks you can set it to be another TV show (a random fake show) and then select to use local data. Then you can tweak the details that show on your ATV, but if you sync to an iPad it will not use the local meta data. (This was at least how it used to works when I was trying to get this working).

To be stable the TV show should only need to use the XML/NFO files (no fake TV show), and these should be used on all devices as they can read the files. Ideally using the file names as well if you just need some basic info like episode name and don’t feel to create a XML/NFO files with all details. Like for family videos “Family Videos/Season1 2020/S01E01 Mike’s birthday.avi” should create a show called “Family Videos”, the first season should be called “2020” with the first episode named “Mike’s birthday”.

Does someone have a working .NFO file for their Tv Shows that he can share with me ? That would be very nice.

Can confirm <genre> and <sorttitle> tags are not.

<genre> is taken from TMDB no matter how much you wish it wasn’t and there is nothing you can do about it. 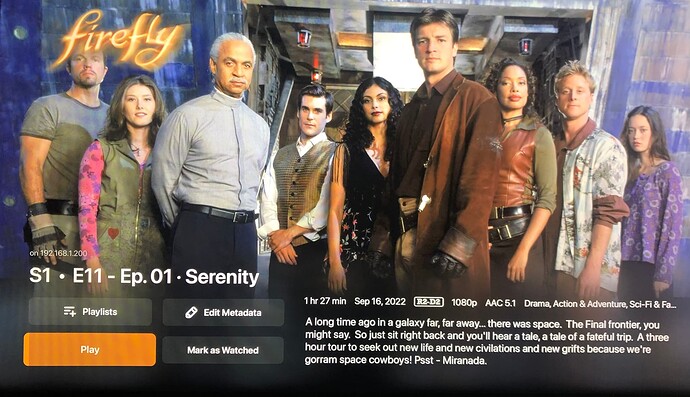 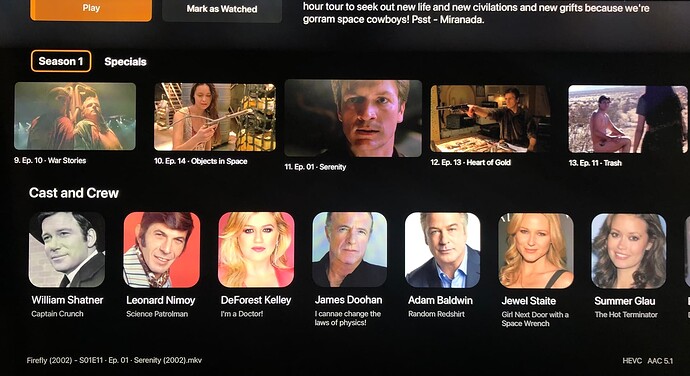