Change sort order of unwatched tv shows to most recent

So my current home screen setup On tvOS includes unwatched tv shows bar, and I’ve noticed that the order of the shows is so random !!
I mean I have recent episode that aired this week but they’re not showing first on that list !? On the other hand I have unwatched episodes of an old show that ended last year but it’s the first on this bar !!
I don’t know what exactly the sorting logic of ordering tv shows on this bar and wondering if there’s a way I could change it to airing date or something.
I already looked up the settings and I’ve set general>sort order > to release date. But that still didn’t fix it.

It appears that the sort order is alphabetical by show name.

That’s the order I’m seeing on the unwatched TV show.

It appears that if you set the sort by to “Release Date” and then scroll all the way to the right and click on “See All…” you’ll get it by season of the show with the most recent unwatched episode. I think this is what your looking for. You can delete the list on the home screen and re add the unwatched as a favorite and then that will open the list of shows sorted with the most recently added, unwatched episode like you’re looking for.

rs that if you set the sort by to “Release Date” and then scroll all the way to the right and click on “See All…” you’ll get it by season of the show with the most recent unwatched episode. I think this is what your looking for. You can delete the list on t

yes I’ve noticed that. when I click on “see all” everything shows up in the correct order by release date.
however the pinned bar in the home screen is all missed up. I’ve already tried unpin it and pin it back again and that didn’t fix it.
I just downloaded the app on my macbook to see if this only affects tvOS version, apparently this bug is also in macOS version.

does the developers check this forum ? since you were able reproduce the same issue I believe this is a bug and I hope it gets addressed in an update as soon as possible.

Moved to suggestions. Thanks.

This is a bug not a suggestion
It shows up correctly sorted by release date on “show all” page. But not on the home screen !!

And this is how it look in “see all” page “PS; this is the correct order with the most recent aired episodes showing up first” 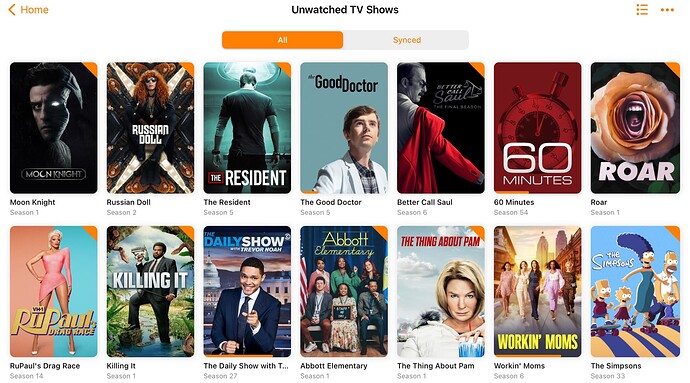 That’s because Infuse grabs the first 30 unwatched shows by title and then shows you that list ordered by release date. Strange, but true!

Does the same for movies.

What !!?
I’m not sure I get that but that definitely sounds like a bug to me !!!

Maybe @james or @NC_Bullseye would like to weigh in ?

As least for me on iOS when I go from Home Screen unwatched tv shows to See All the order is the same.

I believe it has something to do with how big your library is, or I guess how much unwatched tv shows and movies you have.
I’m having the same issue on iOS, iPadOS, macOS and tvOS.

Sort Order in Infuse doesn’t work like you think it should.
Take for instance TV shows. If I set my sort order to Release Date, TV Shows ignores this and displays alphabetical. But in my “Unwatched TV shows” list, clicking on “See All” shows me everything based on date added !?!
Infuse should support more than a global sort order function, and allow users to filter and sort on many different views. Whilst Infuse remains the most convenient and flexible players on the market, its user base recognise the deficiencies in metadata/library management. That’s why lots of the community use Plex in order to address the gap in functionality.

That’s the thing, I’m fine with having only global sorting order. But even that doesn’t work properly !!

Am I being ignored !? Or what exactly is happening here ?

allow users to filter and sort on many different views

Multiple filters is coming in a future version. Maybe we will see sort improvements then

This is what I’m trying to explain here.
This is a BUG, not a feature suggestion