My main page on appleTV4K displays " Unseen movies " with the sort order " by date ".
After adding the movie, I saw that it did not shows on my main page. 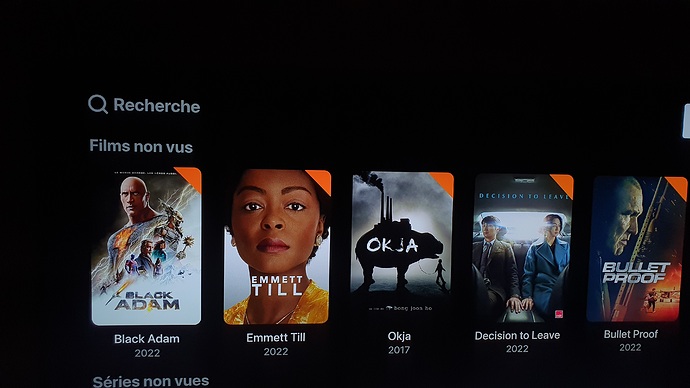 But going at the far right to choose " Show All " then it was there ( and yes, marked “Unseen”, hard to see with that orange poster hehe ). 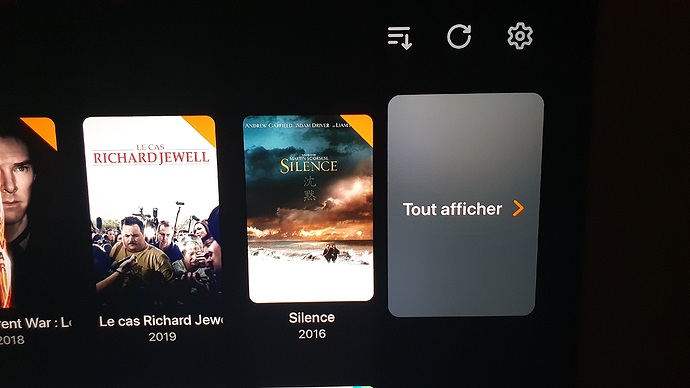 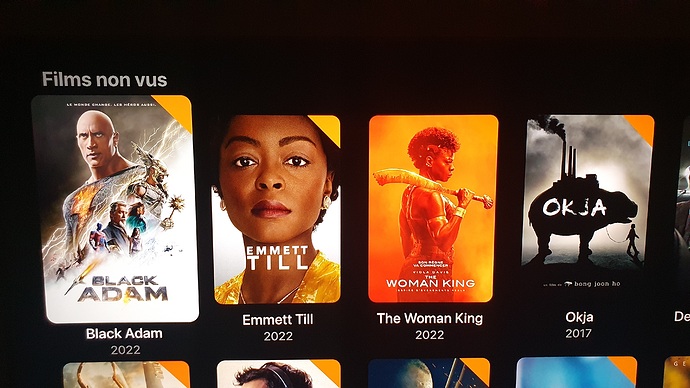 But still invisible on the main screen.
I tried to change the sort order to " Release Date " to test, but even with that option the movie won’t show in the 2022 movies, then I reach 2021…

Tried to reboot Infuse, my AppleTV. Same.
I never saw something like that before, so I don’t know what is triggering that behavior.

Infuse looks at the created/modified dates for the “Recently Added” sorting so if it was created before the others even though you just added it, it’s position will be farther back.

If you think that the Recently Added list should be in the order of when it’s added to Infuse instead of using the file created/modified date you can add your support to that feature request here.

Infuse currently uses the modified/created dates of a file to determine where a new file goes in the “Recently Added” lists for both TV shows and Movies. Infuse used to use the date that the file was first seen by Infuse but on a new install of Infuse the initial list would be a reverse alphabetical ordered list of the first scan so it was changed to the modified/created date. While this is an undesirable result it only affects the very first time you add mass files to Infuse. Now if you’re …

Hey NCB !
That’s why I tried to sort by " Release Date " to confirm that there is something wrong.
By sorting like this, the movie should appear on the main page as a 2022 movie but it’s not the case.

I can record a video if it’s not clear

I have an idea and I’m doing some checking. Thanks for hanging in there.

Thanks for the report. We’ll look into what is going on here.

Thank you @james ! Any leads since?

Looks like it may be fixed in the next release.

Thanks for hanging in there!

This should be resolved in today’s 7.4.9 update.

Also, seems worse because I have a brand new movie file, which was in first position in my home screen all the week ( ‘by date’ sorting ), and with 7.4.9 it vanished too.

Feel free to ask if you need more details.

For me it looks like it’s fixed. The issue I saw on the previous version is that any TV show or movie that started with the word “The” wouldn’t show in the list of 29 items on the home screen but would show in the first 30 on the see all.

If you’re willing to take the time, maybe list the 29 files in the pinned list and then the first 30 of the see all screen.

That was why you weren’t seeing “The Woman King” on the home screen list but it did show in the first 30 of the see all.

I’ll correct my last post. It’s not fixed but it’s better. Still some anomalies on what Infuse shows on the pinned list vs what it shows for the first 30 in the “See All” for that same pinned list. FYI @james

Here are the list of missing items.
Note that before the last update (7.4.9), only " The Woman King " was missing. The movie " The Outfit ", one of the items with ‘The’, was displayed well on the home screen.
Hope this helps. 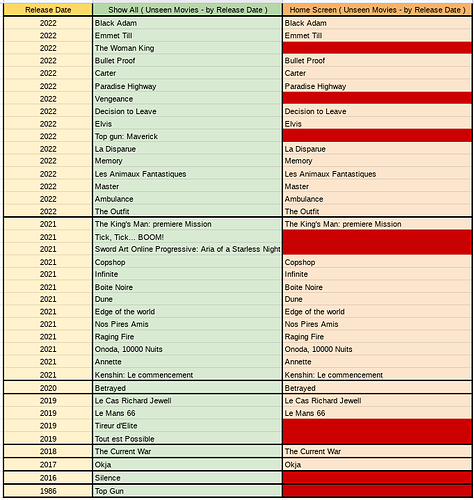 Thanks for that! I did about the same thing and I can’t see what the logic is in what gets displayed and what doesn’t so I hope @james can hammer out what’s going on.

Yes, hard to find a pattern here… Help me, @james Kenobi. You’re my only hope

Anything more we can provide you with info wise?

Another round of improvements have been added in today’s 7.4.10 update.

Will check when the update becomes available here.

Still hosed for the pinned list from library for sort by ratings 8-10 stars.

Still the same as the pics I sent via email.