Bug: Some Movie Categories get split, in both English and Italian

Please check the attached screenshots. You will see that I have both “Family” and “Famiglia”. There should be only “Family” because I have set up the English metadata. There are other categories duplicated. The Apple TV language instead is Italian.

Investigating a bit more, I have noticed that the movies causing the issue are the ones still reporting as audio “MPEG-4 ALS 7.1” instead of “TrueHD 7.1”, as shown in the second screenshot. This has been reported in: Show the audio format in the list of audio tracks. (James, please check it because there is an update)

Actually for “Famiglia” in the first screenshot there is a thumbnail of a movie that has the metadata already modified manually, which returned the correct audio tag, so that movies is missing in the second screenshot.

I know, I can manually modify the metadata for the few movies causing the issue, but somehow I have a feeling the wrong tag gets restored. Also, whatever is the audio tag, I don’t see why it has to classify them as Italian movies. The metadata is supposed to be English.

PS: I have sent the diagnostic, it’s code 4QVRC 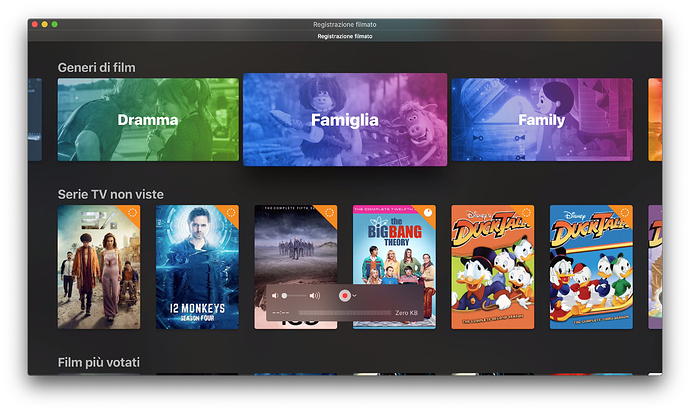 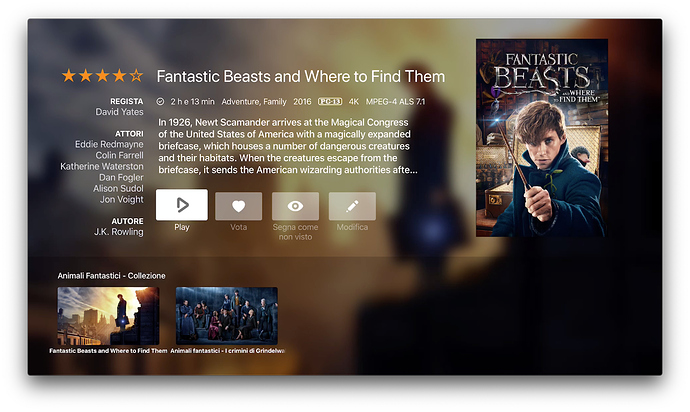 Pushing it up. Maybe this has got lost because it was Easter time. Please note that it isn’t a duplicate of the wrong audio tag report, but this one is a side effect of that bug.

Are you seeing the same videos in both categories, or are the videos all different?

How are you connecting to your source (SMB, NFS, Plex, etc…)?

Are you seeing the same videos in both categories, or are the videos all different?

How are you connecting to your source (SMB, NFS, Plex, etc…)?

They belong to either the English or the Italian collection. The categories are the same but one for each of the two different languages. It’s like if when the audio tag is wrong, it assumes it is an Italian movie and so it also downloads the Italian metadata (the description is in Italian), creating then the (double) category in Italian.

Actually, I see now that “Fantastic beasts” appears as a collection in both “Family” and “Famiglia”. Both movies have the “MPEG-4 ALS 7.1” tag, but one has the English description the second the Italian one. I think, but I can’t swear on it, that I manually updated the metadata of the first movie. So it would mean the audio tag reverted to “MPEG-4 ALS 7.1”, but the description has been kept in English.

Infuse connects to my NAS via SMB in automatic (so SMB3 I suppose).

PS: You can actually see in the 2ns screenshot above how the 1st movies shows the English title, while the 2nd has the Italian title. And I have deleted and recreated the whole metadata once after getting the “MPEG-4 ALS 7.1” bug. I am not sure if the 1st movies has been updated manually after that, though.