Infuse plays perfectly, generally, but I notice if I play a really big file, like a 52gb one, it buffers every few minutes which is a real pain.

What is the likely cause that I should investigate?

First would be the network. WiFi or Ethernet? If WiFi then maybe try a temporary Ethernet cable and see if that helps.

Next, could it be a server disc going to sleep and having to wake?

Is it a local server or a cloud service? That can make a major difference on larger file in particular.

Make sure your cache setting is set to Auto in Infuse. If it is, you may want to try Legacy as a easy test but usually Auto will work better.

Hi, and also, when you use Ethernet, make sure that your system is set to 1000 Mbit. 100 will not be enough. In Some routers you need to activate this function. This might also be relevant for your server.

So the source of the file is sitting on an external hard disk connected to a MacBook.

What I don’t understand is why it plays a 30gb file without issue but fails on a 50gb one.

It’s connected by WiFi. How would I connect using Ethernet? I didn’t think that was possible to Apple TV like a lan?

You need to use a cable. WiFi is not enough. Even if the official data transfer is high enough. It never works with big files.
I am having the same situation. My Mac mini is connected to the router, which is a Fritz box. My two atvs 4K are connected to the router as well. All via cable.
I know the effect since years. Small files work. Large ones don’t. And as I wrote, you need to switch to gigabit. 100 Mbit will Not work as well.

Depending on the kind of MacBook you have, you might need an adapter from usb c or thunderbolt to Ethernet. Older Mac books are having an Ethernet port.

Thanks. But how does the wiring work? What would I connect the MacBook to?

Also this is actually temporary in any event, since I intend to have a NAS soon. Are you suggesting I should have that hard wired as well?

Is there no way of having some sort of DAS to work with Apple TV in the mean time?

Hi, you can connect directly to atv, or via your router. The atv has an Ethernet port. Using an nas would work the same way.
If you connect it directly to the atv, you would need to make sure, that the nas is set to gigabit as well.
Basically using your router as your central station would be much more practical.
I am having no problems with buffering, even with very large files.

Its not really a matter of the file size but more of the audio and video kb/s . If the file is encoded using higher kb/s than your network can transport, you’ll get buffering.

If I plugged my MacBook into my router using Ethernet and my router into the Apple TV, will it automatically all connect or do I need to set something up?

Usually, it should work.
I would switch of WiFi on the Mac, to be on the safe Side.
Also, switch off WiFi on the atv. I’m not sure if both devices will automatically use the cable instead of WiFi.
Check that your router is set to gigabit on all ports.
Maybe you need to give the Mac a new share in infuse.
Once you get your NAS, it will have an Ethernet port, and you can connect it to your router.
If you want to use a switch, make sure that it is a gigabit switch.

Yep. Its the peak of data rates in scenes with big changes in the picture, that is too much for WiFi or 100 Mbit. Usually higher sizes of a file is a good indicator, for what the bit rate will be.
The figure of the average rate is not sufficient enough to describe those peaks.
That leads to confusion very often. When the average rate is mentioned Eg as 80mbit, people might think, that a 100 Mbit system is enough. Or a WiFi with a rate higher than the average rate.
That’s why you always need the cable for high quality files.
Also, a WiFi system can have problems by rf problems caused by other transmitters.

I have a 2013 MacBook and will have to use a USB 3.0 to Ethernet adapter. Do you think that will be fast enough?

Yes, check that you get a good adapter, and cables.

It looks like you’re going in several directions at once. Before you go and purchase more equipment that may or may not work did you check the cache setting?

Have you done a speed test in Infuse on that specific file? What speeds do you get for an average?

Also, I’d highly recommend you NOT use a USB to Ethernet adapter. Use the Apple Thunderbolt to Gigabit Ethernet adapter from Apple. It works well for adding Ethernet and is designed for Apple products. They run around $29 US or cheaper if you find a sale going on.

Yes, thunderbolt would be better. But concerning the rest, my experience says, WiFi for high bit rate will not be enough.

WiFi for high bit rate will not be enough.

While that may be your experience, I currently have a WiFi set up that handles high bit rates fine. The OP may be able to have a working WiFi connection also but there may be other issues and going through the easy ones first will keep them from having to purchase additional equipment that may not be needed.

I stream 4k high quality files via wifi. Up to now I had no buffering issues. But my wifi is providing up to 999 Mbit/s via 5 Ghz

I’m thinking about getting this and almost using like a DAD right next to the ATV? 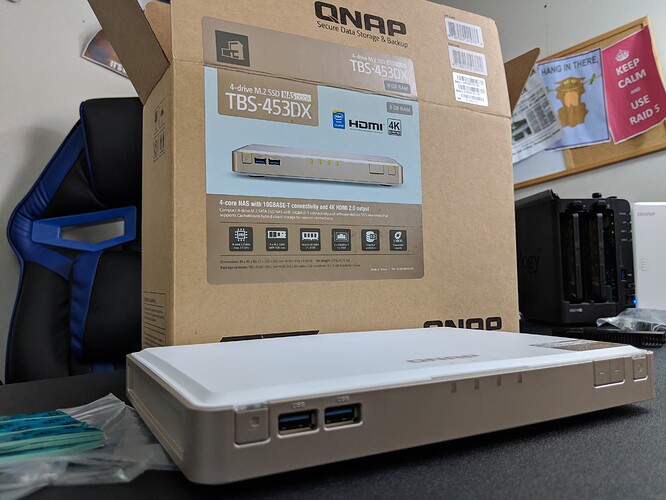 Is the QNAP TBS-453DX NAS Wierd or Wonderful? Of all the devices that QNAP previewed last year, there was one that I distinctly remember being very confused by. Alongside a plethora of powerful 10G…