Hi @James , I tested on my MacBook Pro 14 2021 using the same Spiderman Homecoming at 50:27 quoted (that Vincent from HDTVtest reviewed too),
there’s obviously something very wrong with infuse’s “Apple Color Palette”, It’s not the same as Quicktime and there are bug too. I recommend everyone to stay away from Apple Palette until it’s fixed.

Screen recording is not 10 bit so it doesn’t accurately reflect the color issue in real life, but should be enough to get the idea:

Thanks so much for the update! This is exactly what we were all asking for earlier, so its much appreciated. Did want to mention that I can reproduce the bug that @ddadogba pointed out, and the colors seem a bit more saturated/contract like he mentioned compared to quicktime. Even with those slight issues though, I much prefer this palette to what we had before (its very noticeable in a lot of movies I’ve been watching - especially The Dark Knight).

has this been fixed? are you back to using Infuse palette for now?

Not fixed in 7.3.9. And it’s not in the “upcoming feature” list so I won’t expect a fix coming soon.

Honestly there’re way too many issue in Infuse Mac like stuttering and HDR color issue that infuse team seems having a hard time, I’m not even sure if they can identify the root cause, let alone fix.

For those still struggling with this, this is a good temporary workaround:

Just fyi, one of the best methods I’ve found right now for Dolby Vision support (profile 5 only) is to convert mkv’s to mp4’s via Subler, and then play via Quicktime. https://subler.org/ (Subler preserves the Dolby Vision atom when muxing unlike FFMPEG, at least until the newer patches are applied to FFMPEG).

Subler will convert MKVs with HDR-10 and Dolby Vision content into MP4 containers that Quicktime will play properly.

Hey - I just tested it a bit and seems that this is fixed now on latest MacOS release. Any chance you could test and confirm?

I tested the “Apple palette” again on my Macbook Pro 14 on Mac 12.5 with latest Infuse 7.4.3,
while HDR clipping test pattern looks closed enough to quicktime,
real scene (Spiderman homecoming 50:27) is still way off from what it should be (identical to my post on Feb&April).

Having the exact same issue with inaccurate colours vs Quicktime, YouTube in Safari / Chromium, Movist Pro and Optimus. In all of these others the colours are identical but they appear incorrect / inaccurate for me in Infuse. This is while using “Apple” HDR Colours also. The “Infuse” HDR Colours are even more inaccurate in this regard. I hope this can be addressed soon.

Having the exact same issue

I hope this can be addressed soon.

You may want to update to Infuse 7.4.10 from 7.4.3. There may have been changes since then since this thread is almost 6 months old with no other input since.

Hi, I’m new here and using Infuse 7.4.10. Here’s a screenshot illustrating the issue. I have more if needed. As mentioned above:

Inaccurate colours vs Quicktime, YouTube in Safari / Chromium, Movist Pro and Optimus. In all of these others the colours are identical but they appear incorrect / inaccurate for me in Infuse. This is while using “Apple” HDR Colours also. The “Infuse” HDR Colours are even more inaccurate in this regard. 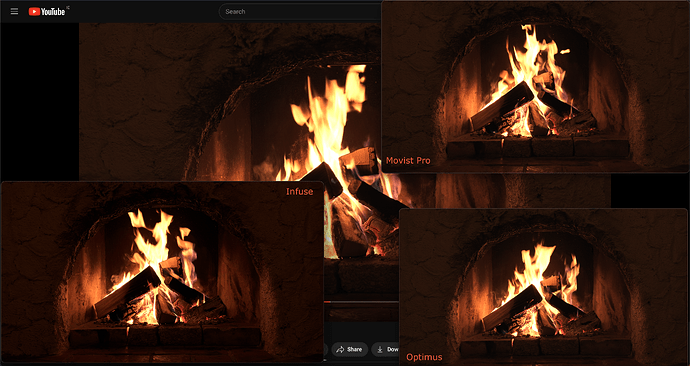 Here’s another screenshot from The Social Network for good measure, this showing how it looks accurate in all other players bar Infuse, Quicktime / Apple TV App being the reference to pay attention to. Still using the “Apple” HDR Colours in Infuse. Hopefully I’m posting this in the right thread.

And finally here’s a screenshot with QuickTime / Apple TV still as the reference but now I’ve set Infuses HDR Colours to the “Infuse” setting instead of “Apple”. As you can see; both settings for HDR in Infuse are inaccurate and not correctly presenting the correct palette / creative intent.