I’m trying to make my library available remotely, I currently have it setup SMB on my home network, but I don’t want all my fixed matches to be wiped if I set it up through a different connection method. Any suggestions?

There is no easy way to deal with it. You could set up both at the same time and that would show you the ones that don’t have duplicates. Those would be the ones you need to fix.

I recommend you rename your files so that they will always be picked up correctly and you don’t have to do any manual edits. It is time consuming, but hopefully it is just a one time ordeal. macOS support batch renaming which works well for TV shows

I use an ancient copy of “FlashRenamer” on Windows to do the same (and run bunches of customized scripts I’ve written utilizing lots of regex substitutions); but there are plenty of other batch-renaming tools available for Windows if that’s not your bag.

I wiped my database recently and on reimport noticed more movies mismatching, both new titles and titles previously working fine.

“Jurassic World Dominion: The Prologue” was completely disappeared from TMDB …

And a bunch of movies with one-word tiles are newly getting hijacked by movies with multi-word titles usually including that one word; but not always; and not always even by titles released in the same year. (This being a long term weakness of the TMDB api.)

TMDB’s api algorithm still needs a lot of work — though it does get most searches right, if you are careful in file naming.

Yea, I use Advanced Renamer to take out all of the nonsense in the downloaded file names, I have a list replace that I modify. That’s funny you mentioned Jurassic World, I recently downloaded the 4K version of all the series and noticed they matched wrong. I try to do a year at the end of movies I know are remakes. I do notice the one word of the title match is usually the problem. I fix new movies as soon as I add them, it’s going back and not knowing what it was even supposed to be so I have to check the credits of the movie and figure it out. With around 4000 this becomes a pain. Glad to know I’m not the only one!

They should create some reference file for the library where you can go in and link the TMDB URL to file name, so when you redo your library it can reference that for edit you’ve made.

Do you have anything you add to the file name that assists with correct matching?

I just add the year to everything (including tv shows) and 99.5% of the time that works and never changes. And make sure to use the full movie name as shown in TMDb.

I recently downloaded the 4K version of all the series and noticed they matched wrong. I try to do a year at the end of movies I know are remakes.

I always add the year. I’d suggest everyone else do the same — it definitely helps refine most searches (the very short title names oddly excepted on occasion).

Problem there is sometimes TMDB changes the URL (some mod disagrees with how a title was created, deletes it, and another adds it back … etc.).

Infuse does keep track of all user-initiated metadata override and if you sync with iTunes these will survive metadata deletions.

To verify how your titles should identify on TMDB without going through the effort of wiping metadata on Infuse, you can search for titles and filter for release years on the TMDB web interface by search in the format “Movie Title y:2018”.

If your desired title doesn’t come up as the first option, than the Infuse search will probably fail as well. That’s when you start troubleshooting.

Do you have anything you add to the file name that assists with correct matching?

When I find a mismatch, first thing I check is the release year listed on TMDB. Those sometimes change when someone updates entries and there was disagreement on which “premier” date was the official one. 2nd is to check my own title for typos.

Third, I check to see what’s special about the title mine was misidentified as, and if I can identify it … the 2016 film “Lion” was being hijacked by “The Lion King” (from ‘94-ish?). I found out that in the “releases” section of Lion King the animated movie made a television premier in Azerbaijan or somewhere … I might have accidentally deleted that TV premier entry to verify that was the issue (oops) … and surprisingly, “Lion” was no longer being hijacked. Obviously this is a major issue with TMDB’s api (giving all listed regional, theatrical, TV, and physical media premier dates equal weight in search to the recognized international theatrical premier date (which TMDB themselves list after each movies title on that movies’ details pages).

Fourth, if there’s nothing out of sorts and ‘vandalizing’ another entry is undesirable; I’ll try renaming my file with one of the alternate titles listed on TMDB (even ones in other languages) and see if that results in a correct match — it often does!

Since Infuse & TMDB only care about the actual file name, you can still organize the movie in a folder with the title you know and love.

I’ve actually programmed my regex replacements to look for triple apostrophes in a movie folder name Common Movie Name (2022) ‘’’Alternate Title’’’ and swap the latter for the former when renaming all the files inside that folder (video file, images, subtitles, metadata).

I’ve got close to that many myself. My OCD won’t let it stand for a single one to be misidentified. So here’s what I do:

I batch rename all my poster .jpg extensions to .jxx. This prevents Infuse from recognizing them and overriding the default images from TMDB.

(When I used .nfo files to edit movie titles, I changed those extensions to .nxx.)

I then load up my library fresh on my ipad and visually scan through the list of posters (and movie titles). Any posters for films that I know I don’t have in my collection jump right out at me. Any duplicate posters (should be right next to each other if viewing by “sort by Title”) will also jump out at me as unless I have multiple copies of that film I’ll know one of them was misidentified as another movie from my collection (which happens most often with films from a same franchise, or the previously mentioned films with short one-word titles).

Scanning the text of the titles also reveals obvious outliers.

This is the most effective method I’ve discovered yet.

A more tedious (and limited method) is viewing “Collections” and scanning for obviously missing collections or members of a given collection — this is how I first noticed the issue, but I wouldn’t recommend anyone rely on this method.

Wow, thank you so much for that! That made it so easy, I still have a lot to go through, but it’s so much faster than any other option.

Wow, thank you so much for that!

Happy to share my experiences, and glad it’s working out for you!

I found a program called Ember Media Manager that creates NFO files and gets metadata from IMDB or TMDB and Infuse will use the data. Did a test with like 10 movies that were matching one word from the title and it fixed them perfectly. 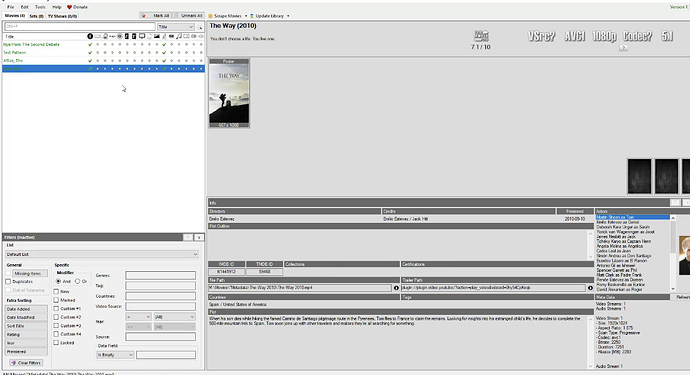 If Infuse is unable to make a match based solely on filename, your local .nfo will not be of assistance because the item will never be included in the library and its associated local .nfo contained data will never be displayed.

You’re correct, I just realized that after clicking on a film and the banner was wrong. I ended up creating a folder for titles that won’t match based on filenames that include title and year and set it to use local metadata (retrieved via Ember). That way in the future if I have to rebuild my library for some reason those exceptions will bypass the matching process. Thanks for pointing that out, I won’t bother matching all ~4000 films through Ember now.

I love Infuse, but what a process it is if you have a large library when you begin using it. Some titles I don’t remember so I have to skip to credits and see the cast to match against.

Silver lining, the process has allowed me to free up some space. I recently broke the 10TB mark, and I have it backed up to three locations.