It would be nice with Apple TV !

I’ve been using Infuse on Apple TV for long time but since my major device today is a Mac I had to switch to other apps as Infuse still misses the time offset feature for its Mac version.

Really love Infuse and hope the product team can add this feature for Mac users.

If this feature is for Pro, please let us know.

I first inquired about this feature shortly after the initial product launch nearly nine years ago and was told it was planned for an upcoming release. It’s such a relatively small but important ask that I have to assume they’ve decided it’s just not worth their time. Otherwise they would have done it years and years and years ago.

That’s quite unacceptable and frustrating. I’ve just purchased the MrMC app on ATV4k.
Will drop Infuse for next payround if the fix is not coming.

Update: The feature no longer seems to have the tag ‘planned’? What happened?

It´s kind of surprising that you can adjust subtitles timing…but not audio.

There has to be some technical reason for this, it is such an important feature on a media player, it can´t just be ignored.

Did you add an audio delay feature?

7.3.4 has a few changes aimed at addressing a few cases where audio could get out of sync, usually when variable speed is used.

An audio delay option is not included in this update, but there is a thread in the suggestions area you can follow.

would like to have the ability to +/- audio delay for out of sync. sometimes there is nothing i can do about resyncing a file, and this would give me the ability to watch the show as is.

I’ve been following that thread, but am very discouraged as it is over three years old. Please listen to your customers and add the audio delay feature which is a standard feature that has been around a long time in other products like VLC.

Same here. Furthermore, the feature was moved from ‘planned’ to ‘wishlist’ a few months ago.
That’s not good.

Using MrMC in the meanwhile.
Nevertheless, Infuse is a 100% more user friendly and clean.

Come on guys, we really need it!

A post was merged into an existing topic: Audio sync issues during playback

Any news about adding this feature soon ??

Just been wanting to use some Bluetooth speakers connected to my Apple TV and there is a consistent small audio delay in the sound so being able to adjust for this in inFuse would be great.

I would have thought my Use Case is becoming increasingly common?

Astonishing that such a basic video player feature is still missing. You cannot always control all factors contributing to audio delay, so this needs to be controllable from the app.
It looks like the number of requests for a feature on this forum does not really influence the planning all that much if these threads can linger on for years.

Have noticed AppleTV has a feature to sync wireless audio between your TV’s speakers and “other Airplay speakers in your home”, or to “align video playback with AirPlay or Bluetooth Audio Output”.

Of course, this isn’t the per-file level of control sought in this thread, but it might help some folks who experience a consistent level of delay between what’s displayed on their screen and what is played from their bluetooth speakers.

The new Delay option can be found under the Audio section of the Playback Menu. Set a delay value directly, or enable Tuning Mode to adjust on the fly while a video is playing.

We will be working to expand this to other platforms in the future. 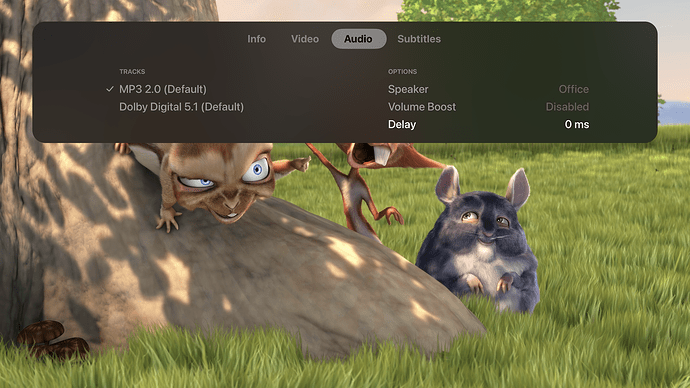 Much love to the team for doing this! Still pro member and I will continue being one. Thanks so so much!

Thanks a lot for this!

Is there any chance for expanding for Kore than 500ms the delay?
500ms is not enough sometimes.