Hi, is there any update to having alphabetical letters down side

This thread is updated on a regular basis so it’s current in the first post.

Thanks, I am part of jellyfin beta team and vs also a paying sub

Do you know which update would add alphabetical scrolling on side ? Seems also that after watching a episode it does not save the right one on deck for up next IE we are watching breaking bad and on season 4 episode 6 but in up next it shows season 5 episode 1

Thanks great work so far

This would be very helpful for anyone with large movie collections. Please consider adding. But to prevent accidental jumping, I would prefer the alphabet to not always be visible and only appear when called up via a swipe command. In Grid View, I’d like to see it fade-in if the user move the cursor all the way to the right then swipes right again - then once again to move over to the just listed alphabet, which could be listed vertically:

In the descriptive cover flow, the alphabet could fade in at the bottom and list horizontally:

In both cases, the brackets is the selection box.

I can see the benefit of displaying alphabet letters while scrolling to indicate whereabouts you are within your library.

I don’t see the benefit however of scrolling through an extensive library to find something.

That takes me back to endless scanning through shelves of videos at Blockbuster without making a decision. It drives my wife and I nuts when the kids get the remote and scroll endlessly up and down and back again.

More user friendly and effective to enable creation of smart playlists that you can save as favorites which is what Kodi offers, especially when you have large libraries of content.

Can you add a scrolling bar and/or letters to quickly scroll through your content? I have pretty large libraries and scrolling now is kind of confusing.

This would be a great feature. I also have a very large library and trying to scroll to a certain movie in the list. Also, would be nice if the name of the movies were under the cover art all the time, not just when the movie is highlighted. Some of the cover art titles are too small to see. Thanks.

With my growing movie collection - I’d love for a way to navigate through my movies based on their starting letter vs. scrolling through every single movie I own to get to the bottom where Zootopia lives.

For example, in the list view on tvOS, if I swiped in from the right on the ATV4 remote, a vertical alphabet would appear and I could jump to a section in my collection based on movies that start with that letter.

That said - thank you for providing me with a central hub to (very elegantly) store my entire video collection - very nice work!

+1
An idea for design would be the new song list view in Apple Music on the TVOS Beta, which has an alphabet on the right margin.

Hello
I from Germany.I hope you understand me

when will a quick alphabet search function be introduced? I have over 2000 films. Scrolling is very tedious

Would be really useful to have some sort of alphabet location indicator visible when scrolling through a large movie database. Currently you just have to scroll really fast, then stop to see what you are up to then scroll fast again, stop and see where you are etc. Would be better if a letter came up while scrolling to indicate where you were. for example A while still in all movies beginning with A, then moving through to B, C, D etc. Thanks.

I moved your post to the suggestions thread that munpip214 referenced.

Also, you may appreciate that this thread is marked as “planned” so there’s a pretty good chance of seeing in the near future.

I really would love to see this.
It’s probably one of my last of two irritations in Infuse.

Requesting a letter index similar to what the official Plex app has to quickly navigate through the movies list.

This is the only blocker that currently prevents me from using Infuse 100%.
Let me explain why.

I don’t really enjoy using my Siri remote so I usually use my LG CX remote via CEC.
While this works fine for 95% of things, there are still some apps that lack some kind of support.

Infuse is one of those apps.
How can I go from the letter A to L with a TV remote when you have a library with thousands of movies? It will take ages…

That’s why I’m requesting a quick shortcut that allow us to jump to a specific letter.

Search sometimes helps, but I don’t remember the name of the movie I’m looking for much of the times, I just know it starts by that letter (I blame my age).

Hope I’m not alone in this.

Please, when are you going to implement this feature?? It is a very important one!!

when are you going to implement this feature?

If you notice, this suggestion is tagged as “planned” and is listed on the upcoming features thread here.

7.4.1 (June) Problem with external subtitles in Jellyfin 10.8 7.4.x (pending) Option to use alternate episode order Fetch backdrop from “No Language” tag instead of specific language tag Option to disable backgroun…

In Plex, when you go to your TV Show or Movie library, you are able to select a letter on the right hand side which will them jump straight to TV Shows or Movies that start with that letter. This makes is much easier to navigate through large libraries. 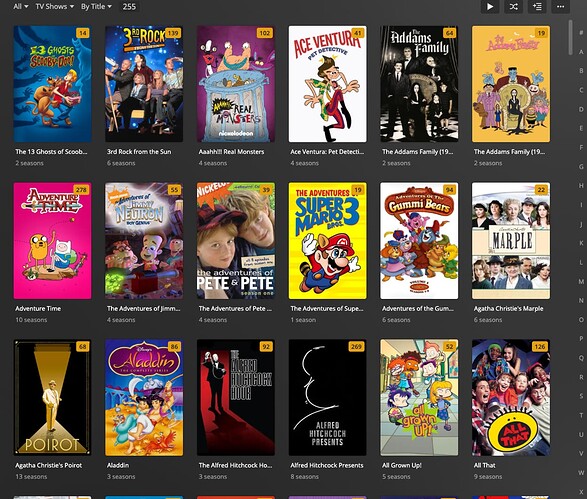 I would love to see the same implemented into Infuse!

I would love to see the same implemented into Infuse!

I moved your post to an already running thread in the suggestion forum.

Note that this feature is tagged as “planned” so it’s on the developers radar.

The alphabet location indicator has been on the upcoming list now for over a year. When it this going to be implemented.