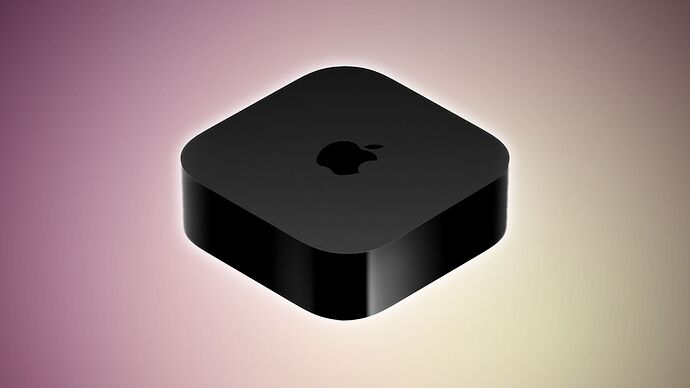 Apple today announced an updated Apple TV 4K model with the A15 Bionic chip, support for HDR10+, and an updated Siri Remote, for a starting price of...

Is it possible that the new Apple TV 2022 supports more Dolby Vision profiles, like that pesky profile 7 that is common on ““Linux ISOs””?

Damn. I guess I missed it in the tech specs and still had hope.

Probably no updates to Dolby MAT either…

This time Apple apparently decided to bet on the gaming capabilities of the new console. The A15 is indeed significantly more powerful than the A12 in the 2021 version. But I would like to see new things just for movie lovers, not games.

And no USB C charging cable for the remote included.

Pointless to upgrade from last or even one before.
DV still only profile 5, audio bitstream - no.
I wish they add support DV any profile MEL/FEL and audio bitstream. Then i can use only 1 device + infuse.

And no USB C charging cable for the remote included

They only cost a few bucks without Apple branding. Not really a deal-breaker. And as (un)often as you need to recharge the remotes, surely we all already own a cable that will do the job?

[ I just bought a cheap 9th gen iPad to replace my long serving mini retina — which hasn’t ever been supported by Infuse 7 — and that did come with a USB charging cable (though a rather short one). So that will do nicely. Or any of my eight thousand others.

surely we all already own a cable that will do the job?

PM your address, I’ll send you one. Lol.

I’ll send you one.

ROFL, Don’t have anything to use it with. Maybe after the bearded one makes his run.

Does my 1st gen 4K serve as a smart home hub?

I honestly never checked, since I’ve got Amazon and Google devices … but I’m getting so damn tired of them “… by the way”ing, “… one more thing”ing, and “… did you know?”ing me all the time I might happily throw them all out if Siri can just turn lights on an off and set timers I ask for and otherwise keep her mouth shut.

Oh, cool. I’ll look into this.

No thread network here, so no concerns there.

I walk in/out of the door on night or day shifts and I know that what I want to happens just happens.

I walk in/out of the door on night or day shifts and I know that what I want to happens just happens.

Was this reply directed at me (any my comments about Alexa & Google’s excessive chattiness)? Because if Siri can just do things I ask for without editorializing or trying to sell me on more ways I could be utilizing her — I swear my Alexa and Google devices come off as more desperate for human interaction than even my lonely self has ever been — that would be golden.

No thread network here, so no concerns there.

It will be. Threads and Matter are going to be the industry standard very very soon.

And yes, Homekit can have things change state based on you arriving home or leaving without you needing to interact with it. It knows when your iphone gets close so it can turn on lights or set alarms when you leave.

Threads and Matter are going to be the industry standard very very soon.

Ah, but that’s all new hardware I’d need to get … and being an apartment dweller, I can really get by with just a single old-fashioned gigabit wireless router 99% of the time. If necessary, I’ve got a second I can set up as an access point.

But yes, for sake of future proofing, I suppose if I were to buy one of the new AppleTVs (which I truly don’t need now no matter how much I might want to upgrade ‘just because’) I ought to consider paying up for the extra capability.

In your opinion with the new apple tv there will be the possibility with Infuse to have Dolby Atmos from the various hd audio formats, for example from True HD?